In 1885 Adolf Baeyer proposed a theory to explain the relative stability of the first few cycloalkanes. He based his theory on the fact that the normal angle between any pair of bonds of a carbon atom is 109º 28’. Baeyer postulated that any deviation of bond angles from the normal tetrahedral value would impose a condition of internal strain on the ring. He also assumed that all cycloalkanes were planner and thus calculated the angles through which each of the valency bond was deflected from the normal direction in the formation of the various rings. This he called Angle Strain, which determined the stability of the ring.

In cyclopropane, the three carbon atoms occupy the corners of an equilateral triangle. Thus cyclopropane has C-C-C bond angles of 60º , This implies that the normal tetrahedral angle of 109º28 between any two bonds is compressed to 60º , and that each of the two bonds involved is pulled in by 1/2(109º 28′-60º) = 24 44 (Fig. 1.1). The value 24º 44’ then represents the angle strain or the deviation through which each bond bends from the normal tetrahedral direction. 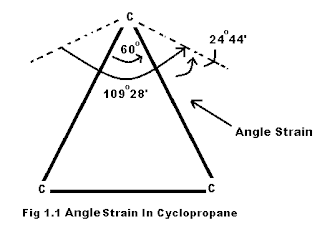 The angle strain for other cycloalkanes can be calculated in the same way. The values are given in Table 29.2. Wheather the angle strain is positive or negative, its magnitude determines the extent of strain in the ring.

The angle strain is most extreme in the case of cyclopropane. Thus according to the Baeyer Strain theory, cyclopropane should be highly strained molecule and consequently most unstable. The cyclopropane ring should, therefore, be expected to open-up on slightest provocation and thus releasing the strain within it. This is actually so. Cyclopropane undergoes ring-opening reactions with Br2, HBr, and H2(Ni) to give open-chain addition products.
The angle strain in the case of cyclobutane is less than that in case of cyclopropane. This signifies greater stability. Thus as expected, cyclobutane undergoes ring opening reactions but only under more drastic condition.