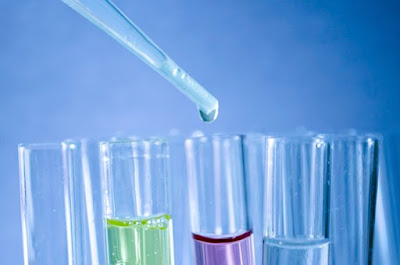 The reaction used in analytical chemistry never result in complete conversion of reactants to products. Instead, they start working to a state of chemical equilibrium in which the ratio of concentrations of reactants and products is constant. Equilibrium-constant expressions are algebraic equations that describe the concentration relationship existing among reactants and products at equilibrium. Among other thing, equilibrium-constant expressions permit calculation of the error in an analysis resulting from the quantity of unreacted analyte that remains when equilibrium has been reached.

The discussion that follows deals with the use of equilibrium-constant expressions to gain information about analytical system in which no more than one or two equilibria are present. Extends these methods to system containing several simultaneous equilibria. Such complex system are often encountered in analytical chemistry.

The rate of this reaction and the extent to which it proceeds to the right can be readily judged by observing the orange-red color of the triiodide ion I3.  (The other participants in the reaction are colorless.) If, for example, 1 mmol of arsenic acid, H3AsO4, is added to 100 mL of a solution containing 3 mmol of potassium iodide, the red color of the triiodide ion appears almost quickly. Within a few seconds, in intensity of the color becomes constant, which shows that the triiodide concentration has become constant (see color plates 1n and 2b).
A solution of identical color intensity (and hence identical triiodide concentration) can also be produced by adding 1 mmol of arsenous acid, H3AsO3, to 100 Ml of a solution containing 1 mmol of triiodide ion (see color plate 1a). Here, the color intensity is initially greater than in the first solution but rapidly decreases as a result of the reaction.

Ultimately the color of the two solutions is identical. Many other combinations of the four reactants can be used to yield solutions that are indistinguishable from the two just described.
The result of the experiments show in color plates 1 and 2 liiustrate that the concentration relationship at chemical equilibrium (that is, the position of equilibrium) is independent of the route by which the equilibrium states is achieved. This relationship is altered by the application of stress to the system, however. Such stresses include changes in temperature, in pressure (if one of the reactants or aqueous Solution and chemical Equilibria.
Product is a gas), or in total concentration of a reactant or a product. These effects can be predicted qualitatively from the Principle of Le Chatelier, which states that the position of chemical equilibrium always shifts in direction that tends to relieve the effect  of an applied stress. For example, an increase in temperature alters the concentration relationship in the direction that tends to absorb heat, and an increase in pressure favors those participants that occupy a smaller total volume.
In an analysis, the effect of introducing an additional amount of a participating species to the reaction mixture is particularly important. Here, the resulting stress is relieved  by a shift in equilibrium in the direction that partially uses up the added substance. Thus, for the equilibrium we have been considering (equation 9-5), the addition of arsenic acid (H3AsO4) or hydrogen ions causes an increase in color as more reverse effect. An equilibrium shift brought about by changing the amount of one of the participating species is called a mass-action effect.
Theoretical and experimental studies of reacting system on the molecular level show that reactions among the participating species continue even after equilibrium is achieved. The constant concentration ratio of reactants and products result from the quality in the rates of the forward and reverse reactions. In other words, chemical equilibrium is a dynamic state in which the rates of the forward and reverse reactions are identical.

The influence of concentration (or pressure if the species are gases) on the position of a chemical equilibrium is conveniently describe in quantitative terms by means of an equilibrium –constant expression. Such expressions are derived from thermodynamics. They are important because they permit the chemist to predict the direction and completeness of a chemical reaction. An equilibrium-constant expression, however, yields no information concerning the rate at which equilibrium is approached. In fact, we sometimes encounter reactions that have highly favorable equilibrium constant but are of title analytical use because their rates are low, This limitation can often be overcome by the use of a catalyst, which speeds the attainment of equilibrium without changing it position.

Consider a generalized equation for a chemical equilibrium.

Where the capital letters represent the formulas of participating chemical species and the lowercase italic letters are the small whole numbers required to balance the equation. Thus, the equation states that w moles of W react with x moles of X to form y moles of y and z moles of Z. The equilibrium-constant expression for this reaction is

Where the square-bracketed terms have the following meanings:
If one (or more) of the species in formula 9-7 is a pure liquid, a pure solid, or the solvent present in excess, no term for this species appears in the equilibrium-constant expression. For example, if Z in equation 9-6 is the solvent H2O, the equilibrium-constant expression simplifies to

We discuss the reason for this simplification in the sections that follow.
The constant K in formula 9-7 is a temperature-dependent numerical quantity called the equilibrium constant. By conference, the concentrations of the products, as the equation is published, are always placed in the numerator and the concentrations of the reactants in the denominator.
Formula 9-7 is only an approximate form of a thermodynamic equilibrium constant expression. The exact form is given by equation 9-8 (in the margin). Generally , we use the approximate form of this formula because it is less tedious and time consuming. In section 10B, we show when the use of formula 9-7 is likely to lead serious errors in equilibrium calculation and how Equation 9-8 is modified in these cases.
37.09024-95.712891