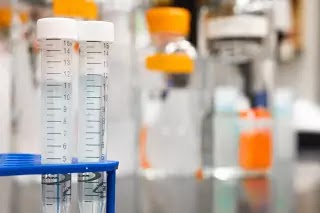 The name of this technique comes from the Greek word Khroma meaning ‘color’.  So ‘chromatography‘ means, ‘color writing’. This technique was discovered by Tswett in 1903.

The phase over which mobile phase flows in chromatography is called the stationary phase.

The solvent or mixture of solvents used for separating components in chromatography is called the mobile phase.

There are possibilities for the value of KD.

It can be classified in three ways:

On the basis of shape:

On the basis of phase:

It is also classified on the basis of phases. As described before the mobile phase can be gas or liquid while the stationary phase can be liquid or solid. Thus we have four combinations:

On the basis of mechanism:

Two types of machines are found in chromatography. In some cases absorption takes place and sometimes separation involves simple partitioning. From this point of view, chromatography is classified into two types:

in 1944, Consider Gondon and Martin introduced paper chromatography. They employed shoes of filter paper as stationary support. The phase is a house that passes within the porous structure of the paper.

There are 3 common ways of carrying out this technique.

In this method, the solvent is in a pool at the bottom of a vessel in which paper is supported. This vessel is known as the chromatographic tank. The mobile phase mines upwards due to capillary action.
A solvent mixture (mobile phase) prepared in accordance with the sample to be separated Thus mixture is put into the chromatographic tank. A 20 cm strip of Whatman No. I grade filter paper is
taken. A thin pencil line is drawn on filter paper about 2.5 cm from one end. 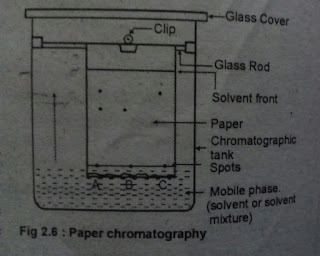 Then spot a point with a narrow capillary tube on the line with the sample mixture solution. To make identification of components easy, spot the points of known compounds on the same line. All spots should be pointed using separate capillary tubes Fig (2.6) B and C are two pure components. A is a mixture of components B and C.
Let the spots dry for some time and then suspend the paper with clips in such a way that the sound on which points are spotted, dips into the solvent up to 5-6 mm. As the solvent rises through the paper, a competition starts. The paper can absorb the solute particles and solvent can dissolve them When the solvent front has risen to about
3/4th of the length of the paper, remove the strip. Mark the solvent front with a pencil and allow the strip to dry. If mixture contain colored components their bands can
be visually identified. If the components are colorless, they can be located by spraying certain reagents. These reagents are called locating agents. The important locating agents are ninhydrin, rubeanic acid, etc.
After locating the bands of components, Rt (retardation factor) values of the components are calculated as:

Each component has its specific R, the value from which it is identified. The chromatography indicates that sample A has both components B and C. Their Rr, values are given by: 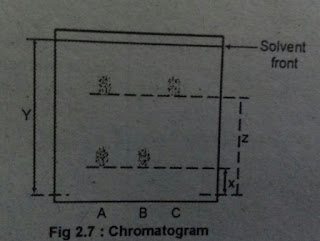 Although it is a simple technique yet it has many important applications: