The fat-soluble vitamins are those soluble in fats and in fat solvents. Included in this classification are vitamins A, D, E, and K. The role of vitamins as food accessories usually is considered in relation to nutritional deficiencies. It should be pointed out that does of the fat-soluble vitamins when given far in excess of normal requirements, also can have toxic effects. Vitamin poisoning occurred in a number of arctic explorers, who became seriously ill after eating polar bear liver. There also have been numerous cases of vitamin poisoning in infants. Young mothers, eager to fulfill all vitamin requirements of their first offspring, sometimes give overdoses of fat-soluble vitamins. Poisoning by water-soluble vitamins is not possible because any amounts not required are voided from the body in urine.
Each of the fat-insoluble vitamins is discussed briefly in the following sections. 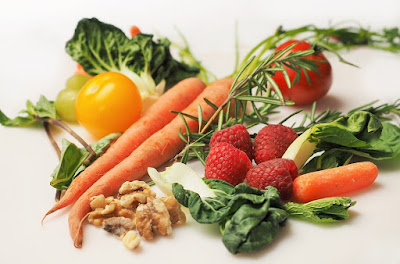 May be obtained from the coloring matter of many green and yellow vegetables. Vitamin A as such is not found in plants, only b-carotene, its precursor or provitamin. The b-carotene molecule when cleaved in the center of the linear chain and converted at each and to an alcohol function, yields two molecules of vitamin A. Other sources of vitamin A are fish-liver oil, the livers of other animals, eggs, butter, and cheese.
Vitamin A1, or retinol, is oxidized in the body to the aldehyde 11-cis-retinal, which combines with a protein called opsin to produce light-sensitive substance rhodopsin. Rhodopsin is located in the retina and, upon absorption of radiation within the visible range, causes isomerization of cis-retinal to the transform.
There are two vitamins A. One is known as a vitamin A1, or retinol, and the other as vitamin A2, or 3-dehydroretional. Vitamin A2 is found in the liver oils of freshwater fish and differs structurally from vitamin A1, found in the livers of cod and other salt-water fish, by having a second double bond between carbons 3 and 4. Physiologically, the two vitamins have the same activity, and both are called Vitamin A.
A deficiency of vitamin A causes night blindness – an inability to see in dim light. Another disease of the eye known as xerophthalmia, in which the tear glands cases to function, results from a lack of Vitamin A.

It is sometimes referred to as the “antirachitic” vitamin. It is related to the proper deposition of calcium phosphate and controls the normal development of the teeth and bones. There are ten or more compounds that have antirachitic properties and are designated D1, D2, D3, etc. Vitamin D from fish oils is D3, while that produced by irradiation of the skin with ultraviolet or sunlight is D2. Vitamin D2 is known as calciferol and is derived from ergosterol, a plant sterol. Milk, by irradiation, is fortified with vitamin D. Vitamin D is produced in or on the skin by irradiation of the sterols present there. Sunlight supplies, not the vitamin, only the necessary radiation. Vitamin D2 has the following structure. 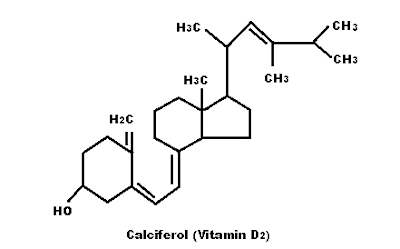 Sometimes called the fertility factor, is related to the proper functioning of the reproductive system. Vitamin E is found in the nonsaponifiable fraction of vegetable oils such as corn-germ oil, cottonseed oil, wheat-germ oil, and peanut oil. It also occurs in green leafy vegetables. As in the case of the A and D vitamins, there also is more than one form of vitamin E. Four different structures called tocopherols have vitamin E activity. These are designated a-, b-, g-, and d-tocopherols. The structure of a-tocopherol, the most potent, is given below.

Vitamin E is also used as an antioxidant for the prevention of oxidative rancidity in vegetable oils.

Is the antihemorrhagic factor related to the blood clotting mechanism? The vitamin is important especially from a surgical standpoint.
There are at least two K vitamins. Vitamin K1 is obtained from the alfalfa leaf; Vitamin K2 is produced by bacterial action in the intestinal canal. The structure of vitamin K1 is given below.