Hard and soft acid and base concept (HSAB) Principle: 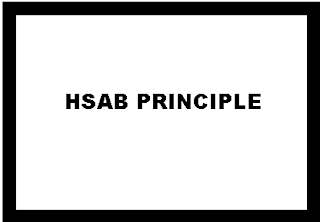 When a paired electron is held by a σ bond between two different atoms that differ widely in size, electronegativity, etc., the bonding pair will be held more tightly to one core than to the other. A bond of this type is generally highly polar and relatively labile and is referred to as a coordinate bond.

When the rates of reaction are considered, the Lewis acids are called Electrophiles and Lewis bases are know as Nucleophiles. The Lewis acids include most of the cations while the Lewis bases are mostly the anions and neutral species. If we break an organic molecule conceptually, we see that it is also a combination of Lewis acid and a Lewis Base e.g., C2H5OH, where ‎C2H5+ is a Lewis acid and OH− is a Lewis base. Hence all carbonium ions ( although may not exist freely) are considered to act as Lewis acids (Electrophiles) since they contain such a structure which can accept a pair of an electron from the Lewis base Similarly, OH- ions act as Lewis base (Nucleophile).

Classification of Acceptor and Donor Atoms and Ions:

In 1958, Chatt and Coworkers divide Lewis Acids (acceptor molecules and ions) into two classes:
Class (a):
These Lewis acids from their most stable complexes with the first member of Group V, VI, & VIII in the Periodic Table i.e., N, O, F (which act as donor atoms or ligands).
Class (b):
These Lewis acids which form their most stable complexes with the donor atoms (ligands) of the subsequent elements of these groups i.e., P, S, Br, etc.
The donor atoms and ions (Lewis Bases) were classified on the basis of electronic affinity, coordinating ability, effective charge, ionic size, and polarization considerations.
The electron affinity sequences of various groups of electron-pair donor atoms and ions (ligands) with respect to the class (a) and class (b) electron-pair acceptors (Lewis acids) is given below:

It is observed that greater the values of electron affinities between donor-acceptor atoms or ions greater will be their coordinating affinities. Thus, in general, more stable complexes of donor atoms i.e., F, O, N, etc, will be formed with class (a) acceptors and class (b) acceptors (Lewis Acids) will form less stable complexes with F, O, N in their respective oxidation states. The polarization of the donors (ligands) by the acceptor also plays an important role in determining the stabilities of the complexes.
Based on the polarization considerations, Pearson introduced the idea of HARD and SOFT acids and bases. According to him, the Lewis bases (ligands) which are more polarizable are ‘soft’, and those which are less polarizable are ‘HARD’. For example, the atoms F, O, and N are the hardest Lewis bases. Hence, Pearson’s concept of Soft and hard acids and bases is in close agreement with a class (a) and (b) acceptors given by Chatt and coworkers, Class (a) refers to hard acids and class (b to soft acids.
Pearson, based on the concept of polarizability, divide the Lewis acids and bases as defined Below:
Hard Bases:
The donor atoms of low polarizabilities, high electronegativities and associated with empty orbitals of high energy are classed as hard bases. They are hard to oxidize.
Soft Bases:
The donor atoms of high polarizabilities, low electronegativities and associated with empty orbitals of low energy are termed as soft bases. They are easy to oxidize.

Hard Acids:
These are acceptor atoms of high positive charge, small size and do not have outer electrons which can be easily excited.
Soft Acids:

These are acceptor atoms of low positive charge, large size and have several outer electrons which can be easily excited.