Infrared spectroscopy is one the most powerful analytical techniques which offers the possibility of chemical identification. IR technique which coupled with intensity measurements may be used for quantitative analysis. Infrared has been of tremendous use to chemists and is currently more popular as compared to other physical techniques in the elucidation of the structure of unknown compounds. 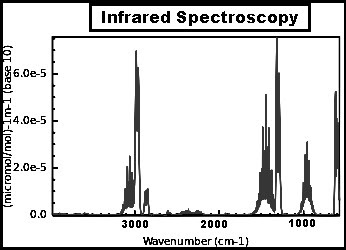 The Range of Infrared Radiation:

The infrared radiation relates generally to that part of the electromagnetic spectrum which lies between the visible and microwave regions. From instrumentation and application point of view, the infrared region has been subdivided as follows:

An infrared spectrum show downward peaks corresponding to absorption, plotted against wavelength (λ) or wave number (v). Wavelength is expressed in μ (microns) or μm  (1μm =10-4 cm) Since λ is inversely proportional to energy, the wave number in cm–1 is mostly used to measure the position of a given infrared absorption.

Requirements for Absorption of Infrared Radiation.

For a molecule to absorb infrared (IR) radiation, it has to fulfill certain requirements, which are as follows (selection rules):
Each non-linear molecule has 3n-6 internal degrees of freedom and the linear molecules have 3n-5. Cn=No. of atoms in the molecule). For a vibration to be IR-active, there must be electrical coupling between oscillating electric field of electromagnetic radiation and molecular motion and should have a change in dipole moment.

Changes in the absorption frequencies foe a particular group take place when the substituents in the neighborhood of that particular group are changed. The frequency moved are due to electronic effects which include:
Inductive Effect. The introduction of an electronegative atom or group causes the inductive effect which results in the increases of bond order. The force constant increases and hence the wave number of absorption rises. Consider the wave number of absorption in the following compounds:
Mesomeric Effect: It causes lengthening or the weakening of a bond loading to the lowering of absorption frequency. In most of the cases, mesomeric effect works along with inductive effect.

Field Effect: In ortho substituted compounds, the lone pair of electron on two atoms influence each other through space interactions and change the vibrational frequencies of both the group. This effect is known as field effect.

Infrared technique is based upon the simple fact that a chemical substance show marked selective absorption in the infrared region. The frequency or wave length of consumption relies on the relative masses of the atoms, the power constants of the bonds and the geometry of the atoms. The absorption of energy is quantized. Then the molecules of a chemical substance vibrate at many rates of vibration, giving rise to close packed absorption bands. Vibrational spectra appear as bands rather than collections because a individual vibrational energy change is accompanied by a number of rotational energy changes. Thus IR spectrum of a chemical substance is a Hand print for its identification. Band intensities are expressed either as transmittance (T) or absorbance (A). Transmittance is the ratio of the radiant energy transmitted by a example to the radiant energy incident on the sample. Absorbance is the logarithm, to the base 10, of the reciprocal of the transmittance, A=log10 (1/T).

Flow Sheet diagram of Infrared Spectrophotometers is given below: