Manufacture of ethyl alcohol from molasses: 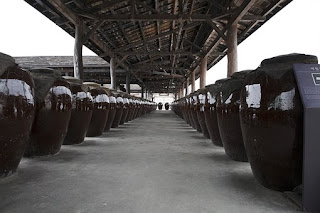 Molasses id first diluted with water. One volume of molasses is blended with 5 volumes of water.

Molasses usually contain enough nitrogenous matter to act as food for yeast during fermentation. If the nitrogen content of the molasses is poor, it may be fortified with ammonium sulphate or ammonium phosphate.

The solution is then made acidic with a little amount of sulphuric acid. Acidity is favourable to the growth of yeast but unfavourable to most other bacteria. Care should be taken to avoid an excess of acid as the yeast may be killed.

The resulting solution is received in a large fermentation tank and yeast is added to it. The mixture is maintained at about 30ºC for 2 or 3 days. During this period the enzymes invertase and zymase present in yeast bring about the conversion of sugars into ethyl alcohol. During the process, the liquor froths owing to the evolution of carbon dioxide. The fermented liquid is known as WASH.

The wash contains 15-18% ethyl alcohol. It is subjected to fractional distillation in a special column (Fig. 1.1) The column is divided into the number of compartments by means of plates. These plates are provided with valves and drop tubes. Wash is admitted near the top. As it travels down the column, it meets the up-coming current of steam. The steam converts ethyl alcohol into vapours. These vapours rise up and are fed into the condenser. The high boiling impurities travel down the column. The fractional refining of the wash yields 3 fractions: 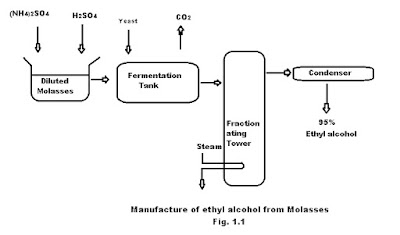