Mendeleev interpreted this relation between elements on the basis of Periodic Law which he Stated as:
“The properties of the element are a periodic function of their atomic weights”
However certain discrepancies were noted while arranging the elements on the basis of atomic weights. For example, beryllium was out of place in the table as its atomic mass was which should fit in between carbon and nitrogen. Similarly, inert gases had no proper place in the Periodic Table.
These problems were not fully resolved to unite 1914 when Moseley showed that elements could be arranged in a Periodic pattern on the basis of their atomic number. The Periodic Law now states as:

“The  properties are a periodic function of their atomic numbers.”

By taking atomic numbers as the bases of the Periodic classification of elements, various anomalies and misfits have been removed. For example, proper positions to cobalt and nickel, potassium and argon, etc., have been given.
The classification of elements was an interesting arrangement and attracted considerable attention. Several gaps in the table suggested the discovery of new elements. Chemical and physical properties of unknown elements could be predicted which helped in the search of new elements. Mendeleev suggested that elements similar to aluminum and silicon should exist. Gallium, Ga (similar to aluminum) was discovered in 1875 and Germanium. Gein 1886, Mendeleev solved the problem of odd elements (which could not be adjusted properly in a group) by dividing groups into subgroups ‘A’ and ‘B’ for example. Amoung metals of the first group, sodium and potassium were placed in Group IA and copper and silver in Group IB because of the difference in properties. Noble gases were discovered in the last decade of the nineteenth century and were placed in zero groups because of their inertness.

The main features of Mendeleev’s Periodic Table were the arrangements of elements in vertical columns or groups and the horizontal rows or periods. Left Spaces for the unknown elements and predicated properties of the Germanium which was not discovered until 1886. He called it eka-silicon as it fell below Silicon.

Mendeleev’s Periodic table in spite of its advantages suffers from the following drawbacks and has thus limitations in its application.
The position of hydrogen is not clear because it resembles both alkali metals and halogens. It gives positive ions like alkali metals and gives the hydride ions like halides.
Certain chemically similar elements, e.g., copper, gold, platinum are places in different groups while some dissimilar elements are grouped together.
Certain elements of higher atomic weight proceed with others with lower atomic weight.
Argon ( At. Wt. = 40) precedes + potassium ( At. Wt. = 39)
Cobalt ( At. Wt. =59) precedes Nickel (At. Wt. =58.6)
No position is assigned to isotopes in different groups.
Maximum valance state id defected by an element in a particular group. The elements of groups  VIII usually do not defect 8 maximum oxidation state accept ruthenium osmium.
No explanation is available for the inert pair affected the stability of valence state differing by the unit of two.
The anomalous behavior of a first member of a group and for the diagonal relationship cannot be explained. The lanthanides or uncommon piles of earth and actinides don’t locate any appropriate places in the Periodic table.

The standard form of Periodic Table is shown in Table 1.4 This is not the only form of Periodic Table possible. Different types of the periodic table such as rectangular, triangular, circular and even three-dimensioned tables have been presented. Each table has its advantages and disadvantages. All Tables depict interrelationship between the elements. 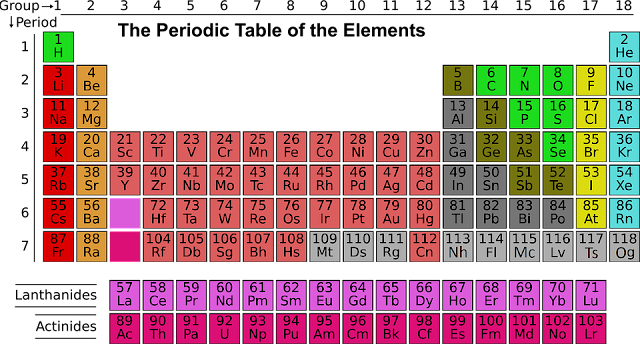