Skip to content
Methyl alcohol is known as Wood Alcohol because it was formerly obtained by the destructive distillation of wood. 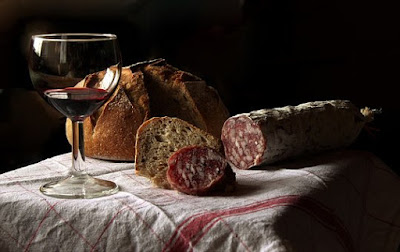 Methyl alcohol may be prepared by any of the general methods described before. For large scale production, the following three methods can be used:

Today, methanol is mostly manufactured by this method. Steam is passed through red-hot coke to form water gas. Water gas is a blend of carbon monoxide and hydrogen.

Water-gas is blended with half its volume of hydrogen. The mixture is compressed to 300 atmospheres. It is then passed over a zinc oxide-chromium oxide catalyst at 300ºC. Methyl alcohol vapors are produced which are condensed (Fig. 15.2). 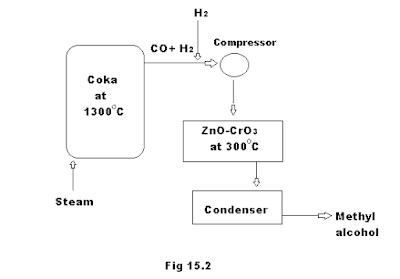 Methyl alcohol is also manufactured from methane obtained from natural gas. A mixture of methane and oxygen (9:1) is passed over the copper catalyst at 250ºC under pressure. Methane is oxidized to methyl alcohol.

Wood is heated to 400ºC in iron retorts in the absence of air (Destructive distillation) to produce:
Wood-Gas.
This is a gaseous mixture which consists of CH4, CH3-CH3,H2,CO2,CO, and N2.
Pyroligneous Acid.
This is an aqueous mixture which consists of 5% methyl alcohol, 0.5% acetone, and 10% acetic acid.
Wood Tar.
This is a thick black liquid that separates from the aqueous distillate. On further distillation, it gives a mixture of cresols.
Wood Charcoal.
This is a solid residue that is left in iron retorts. It consists mainly of carbon and is a popular domestic fuel.
Separation of Methyl Alcohol from Pyroligneous Acid. Pyroligneous acid is a mixture of acetic acid, acetone, and methyl alcohol. Methyl alcohol is isolated from it by the following steps:

Methyl alcohol is a colourless liquid, bp 64.5ºC. It is miscible with water in all proportions. When taken internally, methyl alcohol is a poison. As little as 30 ml can cause death, and lesser amounts can cause irreversible blindness. A mixture of methyl alcohol vapour and air is easily ignited by even a small spark. Chemically it behaves like a typical monohydric alcohol. It gives most of the general reactions mentioned before.