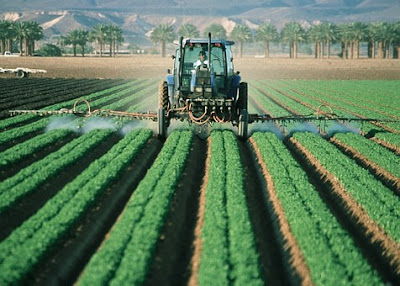 Those substance which can directly kill an unwanted organism or control by interfering with its reproduction process are called pesticides.
Pests harm the crops and transmit diseases both to human being and animals.

We can produce large amount of food on relatively small amount of land by using pesticides.

There are more than ten thousand synthetic organic pesticides which have been formulated. There are several principal types according to their general chemical nature.

Pesticides and eradication of diseases:

Various pesticides have been used for the eradications of following diseases:
Moreover, the pesticides boost up the crop production.

Pesticides and contamination of soil:

When pesticides are used excessively then there is a possibility of greater crop yield. Anyhow, if this use is not properly checked and controlled then the soil is contaminated along with plants and water.

Following are different aspects in this respect:

Synthetic organic chemicals including chlorinated hydrocarbons can cause the following problems:
One should be careful that when such compounds are taken in low concentration then there is a long period of time between exposure and the appearance of the disease.
37.09024-95.712891