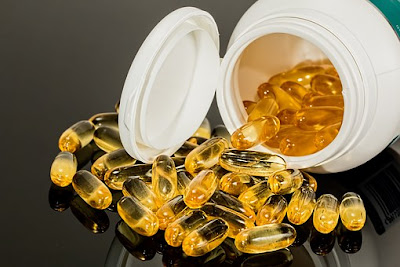 Now called ascorbic acid, is the vitamin that prevents scurvy. A person with scurvy suffers pain in the joints and hemorrhages from the mucous membranes of the mouth. The gums especially are affected and become red, ulcerated, and even gangrenous. Ascorbic acid is abundantly found in citrus fruits, tomatoes, green peppers, and parsley. It should be obtained from fresh sources for it loses its potency when heated or when exposed to air for any length of time. Ascorbic acid is a hexose derivative with the following structure.

B. The B Vitamin Complex.

Vitamin designated as B vitamins were at one time all thought to be the same. The isolation of each new factor from vitamin B preparations has led to a designation of B1, B2, B3, etc, for each new factor. B vitamins appear to play an important role in energy metabolism. A brief discussion of the principle B vitamin is given in the following section.

A deficiency of which causes beriberi in humans is present in whole cereal grains, legumes, lean meat, nuts, and yeast. The vitamin has been found to contain both the pyrimidine and thiazole heterocyclic system. The structure of thiamine has been determined, and the vitamin has been prepared. Thiamine usually is prepared in the form of an acid salt.

Thiamine occurs in nature either as the pyrophosphoric acid ester or as the free vitamin.

Is an orange-yellow, crystalline compound widely distributed in nature. It is found in milk, lean meats, liver, fish, eggs, and leafy vegetables. A lack of riboflavin in the diet causes inflammation of the lips, dermatitis and dryness and burning of the eyes, accompanied by a sensitivity to light. The structure of riboflavin is shown.

Another of the B vitamins is the antipellagra factor. Pellagra is a disease characterized by dermatitis, a pigmentation, and thickening of the skin, and soreness and inflammation of the tongue and mouth.
Niacin may be found in most of the same foods that supply riboflavin. Especially rich sources of niacin are lean meats and liver. Although present in whole cereal grains, niacin is lost in the milling process. The niacin structure is part of the enzyme nicotinamide-adenine-dinucleotide  (NAD). The structural formula of niacin, shown below, is relatively simple when compared to those of other vitamins. The oxidation of nicotine or b-picoline (3-methylpyridine) produces nicotinic acid or niacin.

Is the vitamin that prevents pernicious anemia. It is a dark red crystalline compound with a complex structure. Like heme and chlorophyll-a, it also contains a porphyrin nucleus, but a unique feature of its structure is the presence of trivalent cobalt. Vitamin B12 was the first cobalt-containing organic compounds to be found. It sometimes is referred to as cobalamin. It is found most abundantly in liver but also occurs in meat, eggs, and seafoods. The structure of vitamin B12 is shown in Fig. 1.1. 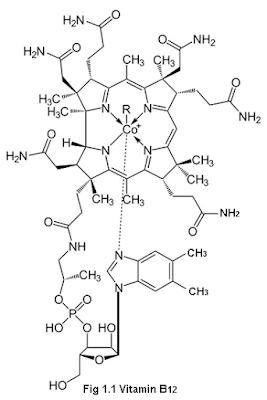