Skip to content
Spectroscopy involved using instruments to examine the radiation emitted or absorbed by chemicals giving information about their molecular structure.

The distance between two successive crests or troughs of a wave in a beam of radiation is called wavelength and is denoted by λ (lambda). The units commonly used for wavelength are angstrom, nanometer, micrometer and meter (1m = 106 µm = 109 nm = 1010 0A)

The number of waves passing through a point on the path of a beam of radiation per second is called frequency and is denoted by V (nu). It is expressed in hertz. (Hz) or cycles per second (cps). (1 Hz = 1 cps)

It is the number of waves passing per centimeter. A common unit for vs is the reciprocal centimeter (cm –1)

Electromagnetic radiation can be characterized in terms of energy possessed by each photon of radiation. The SI unit is joule (J). Each photon has an energy that is proportional to the frequency of light.
Cosmic rays, gamma rays, X-rays, ultraviolet-visible light, infrared rays, microwaves and radio waves, all are electromagnetic radiation. The electromagnetic spectrum covers a wide range of wavelengths and radiations of different wavelengths have different characteristics. The whole electromagnetic spectrum can be conveniently divided into several regions, each region can be defined by the limits of any of the four parameters, i.e., wavelength, frequency, wavenumber or energy. 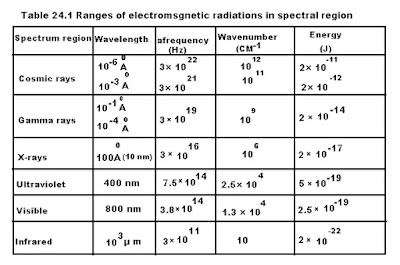