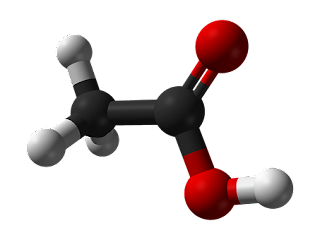 Acetic acid occurs in fruit juices which have become sour as a result of fermentation. It is a chief constituent of vinegar (Latin, acetum= vinegar).

Acetic acid can be prepared by any of the general methods inscribed before. The following methods are used for the large-scale preparation of acetic acid.

Nowadays acetic acid is mainly manufactured by the air-oxidation of acetaldehyde in the presence of manganous acetate. 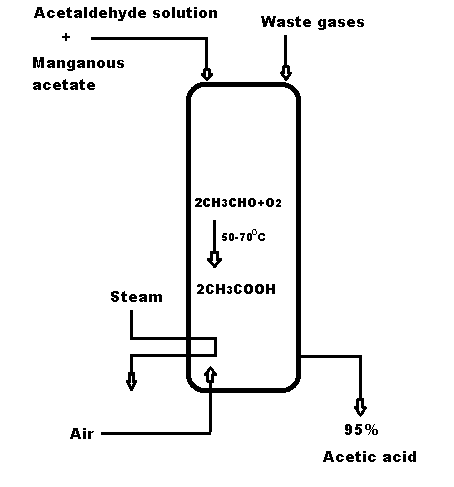 A current of air under pressure is bubbled through a highly concentrated solution of acetaldehyde in a prevent the formation of highly poisonous peracetic acid, CH, CO-OOH. The temperature of the reaction stainless-steel reaction vessel. A small amount of manganese acetate is also added to the aldehyde solution to the mixture is maintained at 50-70°C with the help of steam coils. The crude acetic acid so produced has a concentration of about 95 per cent. It is further purified by distillation.
Acetaldehyde used in the above process may be obtained from acetylene.

Acetic acid is also manufactured by the air-condition of butane (obtainable from petroleum) in the presence of cobalt acetate catalyst.

This process is limited to the production of vinegar for the food industry. Vinegar is 4 to 6 per cent acetic acid and is obtained from fermented liquors containing 12 to 15 per cane ethanol. The aqueous solution of ethanol in contact with air and under the influence of Bacterium acetic produces acetic acid. 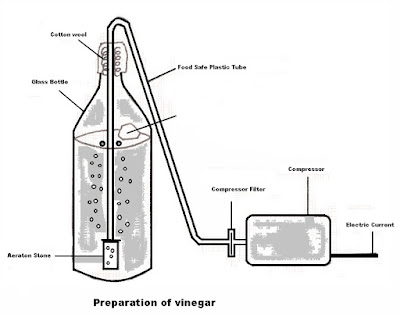 In the (quick Vinegar Process, large wooden vats filled with wood shavings impregnated with old vinegar (Bacterium acetic) are used in series. The cats are fitted with a perforated cover and the ethanol solution is introduced at the top of the first vat and allowed to trickle down the shavings. Air is drawn in through the holes in the lower walls of the vessel and passes up in the opposite direction to the trickling liquid. The heat generated in the oxidation of ethanol to acetic acid maintains the temperature at 35ºC which is favourable to the growth and activity of bacteria. The liquor leaving the bottom of each what is introduced at the top of the next vat. The maximum concentration of acetic acid obtained by this method is 10 per cent. The process requires 8 to 10 days for completion.

Acetic acid is a colourless, corrosive liquid with vinegar odour and sour taste, bp 118ºC mp 16.6°C. The vapours are suffocating and cause damage to the lungs. Pure acetic acid is called Glacial Acetic Acid because it forms an ice-like solid when cooled. It is miscible with water, ether, and ethanol. Acetic acid is a typical carboxylic acid and gives all the general reactions of the class.

Acetic acid is used in the manufacture of (F) white vinegar : (7) cellulose acetate and polyvinyl acetate: and (3) acetone and esters used in perfumes. dyes, plastics, and pharmaceuticals.