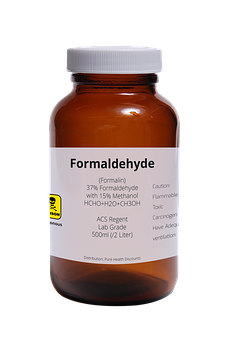 Formaldehyde is the simplest member of the aldehyde family.
Preparation. It is manufactured

By dehydrogenation of ethanol. Methanol vapours are passed over heated silver catalyst at 300°C.

By air oxidation of methanol. Methanol vapours and limited amount of air are passed over heated silver catalyst at 450°C.

By air oxidation of methane in the presence of various metallic oxides.

Since formaldehyde is a gas, the product is marketed as 40% aqueous solution under the name Formalin.

Formaldehyde is a colourless gas, bp -21°C. It has an irritating odour. It is extremely soluble in water.

When treated with ammonia, it does not give an aldehyde ammonia, but forms hexamethylene tetramine. 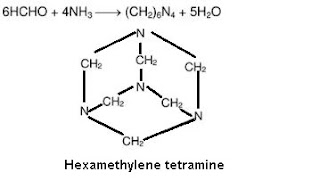 hexamethylene tetramine is used a urinary antiseptic, and has been given the trade name of  Urotropine.

Like other aldehydes, it reacts with alcohols to form acetals. For example, formaldehyde reacts with methanol in the presence of HCl to form Methylal.

Formaldehyde is sold as 40% aqueous solution under the name FORMALIN and is used in this form for most purposes. Formalin is used.