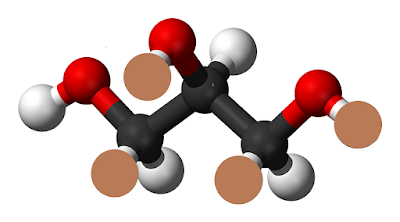 Glycerol or 1,2,3-propanetriol is the most important trihydric alcohol. It was formerly known as Glycerine. Glycerol is found in all-natural fats and oils as glycerol esters of long-chain carboxylic acids.

(1) From Fats and Oils.
Natural tits and fats are triesters of glycerol and long-chain carboxylic acids (mainly palmitic, stearic, and oleic acid). On hydrolysis with alkali, the fat and oils produce glycerol and the sails of the long-chain acids which are called soaps.

In the above equation, R is 9 to 17 carbons. The hydrolysis of fats and oils is carried originally for soap manufacture, and glycerol is obtained as a by-product. This is still a commercial source of glycerol.

Glycerol from Soap Manufacture.
In soap manufacture, the fat is hydrolyzed by boiling with an alkali solution. The carboxylic acids produced by hydrolysis react with the alkali to form solid soap while the glycerol is left in the solution. The soap is filtered out. The filtrate is called Spent Lye.
Spent lye contains 4 to 6 per cent glycerol, unused alkali, soluble soaps, and suspended impurities. It is allowed to stand in a tank where most of the suspended impurities settle down. The clear solution is transferred to a new tank where it is first treated with HCL to neutralise excess alkali. It is then treated with alum (aluminium sulphate) and steam (Fig 16:2). The remaining excess alkali is precipitated as aluminium hydroxide and the soluble soaps are converted into insoluble aluminium soaps. These impurities are filtered out. The filtrate is next concentrated under vacuum when most of the sodium chloride separates out. This is filtered and the filtrate is treated with animal charcoal to remove coloured impurities. After filtration, it is again subjected to vacuum distillation. The glycerol thus obtained is 90 per cent pure. To obtain pure glycerol, it is redistilled under vacuum until distillate has a specific gravity of 26.

Glycerol is a colourless, odourless sweet-tasting and syrupy liquid, bp 200°C. it is non-toxic. Glycerol is soluble in water and ethanol, but insoluble in ether. It is hygroscopic, that is, it absorbs moisture from the air.

Glycerol molecule contains two primary -OH groups and one secondary -OH group. It undergoes many of the reactions to be expected of these types of alcohols. The carbon atoms in glycerol are indicated as α, β and α.