It is the most important aromatic nitro compound. 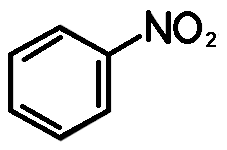 Both in the laboratory as well as in industry, nitrobenzene is prepared by heating benzene with a mixture of concentrated nitric acid and sulphuric acid at 50°C.

The resulting nitrobenzene is separated, washed with sodium carbonate solution to remove any acid, and purified by distillation using an air condenser. The laboratory procedure and the one used on a large scale differ only in working details.

Benzene is added slowly to a mixture of concentrated nitric and sulfuric acids in a flask. The temperature is kept below 50°C to limit the formation of m-dinitrobenzene. When the reagents are all mixed, the mixture is heated under a reflux condenser, with shaking for about 30 minutes. The contents of the flask are then poured into a large amount of water to separate the nitrobenzene as heavy oil. The nitrobenzene

layer is separated from the aqueous Iayer, washed with water and dilute sodium carbonate solution, dried over anhydrous calcium chloride, and finally distilled (at 207-211°C) using an air condenser.

On a large scale, nitrobenzene is prepared by the action of a mixture of nitric acid and sulphuric acid on benzene. The nitration is carried in a stainless steel pan fitted with a stirrer and cooling-water pipe to remove heat generated by the reaction and to maintain the temperature at 50°C. When nitration is complete, the nitrobenzene layer is separated from the spent acid by decantation. The crude nitrobenzene is then washed
with water, sodium carbonate solution, and again water. The product is finally purified by distillation in a
fractionating column and cooling the vapour in air-condenser.

Nitrobenzene is a pale yellow liquid (bp 211° C; sp. gr.1.087) having odour of bitter almonds. It is insoluble in water but dissolves readily in most organic solvents. It is steam- volatile. Nitrobenzene is highly toxic.

The chemical reactions of nitrobenzene are those of the nitro group and the phenyl group. These have already been discussed. The only important reaction of –NO2  group is that of a reduction in acid medium, neutral medium or alkaline medium.