NMR Spectroscopy involves absorption of electromagnetic radiation in the radio frequency region. Absorption of radio waves in the presence of magnetic field is accompanied by a special kind of nuclear transition, and for this reason we call this kind of spectroscopy nuclear magnetic resonance NMR Spectroscopy.

The nuclei of certain atoms behave as if they are spinning charges. Any spinning charge makes a magnetic field and behaves as if it were a tiny bar magnet. Of the three nuclei most common in organic compounds (1H, 12C, and 16O)only the hydrogen nucleus proton behaves in this manner. 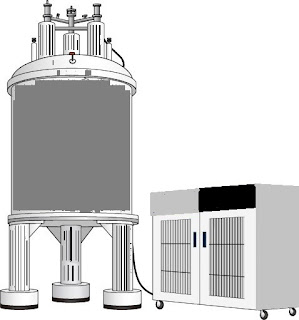 When a proton in an organic molecule is placed in a powerful magnetic field, it can align with the field or against it. In the more stable low-energy state, it is arranged with the magnetic field. If power is supplied in the form of radio waves of exactly the right frequency, radiation will be absorbed and the nucleus will “flip” and align against the applied magnetic field in the higher energy state. For example, a proton in an applied field of 14000 gauss requires a frequency of 60 million hertz (cycles per second) for this particular transition. When this exact frequency is apply, it is absorbed, and the absorption consumption on a chart paper. In practice, either the magnetic field can be held constant and the radio frequency varied, or more commonly, the radio frequency can be held constant and the magnetic field varied. Fig. 9.8 shows the various components of a NMR spectrometer.

The main purpose of NMR is not to detect the presence of protons in a molecule. It can distinguish between protons in different chemical environments within the molecule. Protons on benzene ring, or on a carbon bearing a chlorine, or on a carbon adjacent to a carbonyl group absorb radio frequency powers at different applied magnetic fields, and appear at different locations (chemical shifts) on the recording paper. Also, the position of absorption is relatively constant for protons in a particular chemical or structural environment. Hence, the number of signals recorded on the NMR chart paper indicates the number of different types of protons in a molecule. The position of the peak can give info about the molecular structure in the vicinity of the proton.

Nuclear magnetic resonance chart paper is rectangular with a linear scale of 𝛿 (delta) units across the bottom. Most chart papers have scales from 𝛿  = 0 to 𝛿  = 8 or 9 ppm (parts per million). To every sample a small amount of Tetramethylsilane (TMS), (CH3)4, Si, is added as a reference (the TMS signal is at 𝛿 = 0) All other signals are relative to TMS. Sometimes (tara) scale is used where the TMS signal is at 10.0 ppm. Hence τ = 10 – 𝛿. 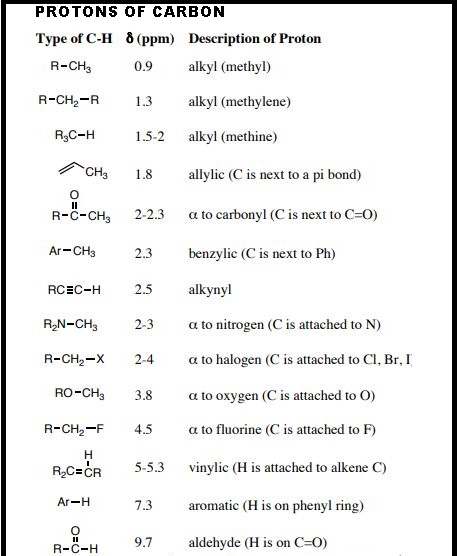 As example, let us consider the NMR spectrum of benzyl alcohol.Notice that there are four signals in this spectrum.

The relative areas under the various peaks of a NMR spectrum are in proportion to the number of protons contributing to each signal. areas can be electronically integrated by a NMR spectrometer. Comparison of the areas provides the ratio among the various kinds of protons in the molecule. For example, consider the NMR spectrum of benzyl alcohol
A). The hydrogens in the molecule are in a l : 2:5 ratio, like the corresponding areas in the spectrum.

Hydrogens on adjacent carbons. each with a different chemical shift, can influence the signal of the other. This influence appears as peak splitting. We can generalise the phenomenon by saying that the number of peaks into which a particular proton’s signal is split, equals one more than the total number of protons on directly adjacent carbons. The split peaks are not of equal height shows the splitting pattern for various types of non-equivalent protons.
In the NMR spectrum of ethyl alcohol  notice that the ethyl group is indicated by a quarter and a triplet.
In the NMR spectrum of isopropyl benzene notice that the isopropyl group is  indicated by a better and a doublet.