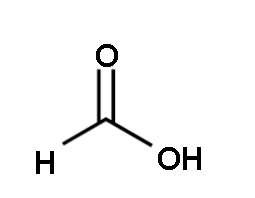 Formic acid derives its name from the fact that it was first obtained by distillation of ants (Latin, Formica =ant):
Preparation. Formic acid may be obtained as follows:
(1) From Methanol. By the oxidation of methanol with acidified sodium dichromate solution. 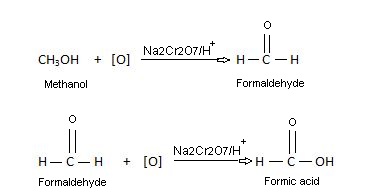 (2) From Oxalic Acid. Formic acid is prepared in the laboratory by heating oxalic acid with glycerol catalyst at 110°C.

Anhydrous glycerol (50 ml) and powdered oxalic acid (40 g) are placed in a flask and the apparatus set up as shown in Fig. 1.1 The flask is heated at 1 C until the evolution of carbon dioxide (marked by effervescence) ceases. The reaction flask is then cooled and a fresh lot of oxalic acid (40 g) is added. The mixture is again heated at 110°C when an aqueous solution of formic acid collects in the receiver. 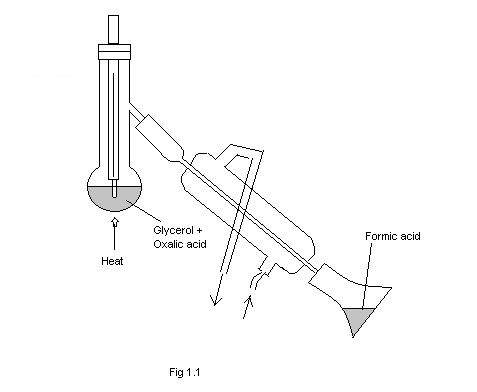 The aqueous formic acid is neutralised with lead carbonate. The solution of lead formate thus produced is filtered and concentrated. The crystals of lead formate are then charged in the inner tube of a water-condenser and the apparatus set up as shown in Fig. 1.2. Hydrogen sulphide is allowed to pass through the condenser while steam is passed through its outer jacket. The anhydrous formic acid collecting in the receiver flask is freed from dissolved hydrogen sulphide by distilling over fresh lead formate. Anhydrous formic acid may also be made in the laboratory by distilling a mixture of sodium formate and sodium hydrogen sulphate. 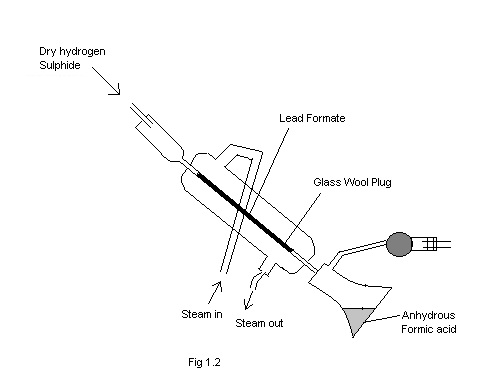 (3) From Carbon Monoxide. Formic acid is prepared industrially by beating carbon monoxide. with sodium hydroxide at 150°C and under the pressure of 8 atmospheres.

The free acid is liberated from its sodium salt by reaction with sulphuric acid.

Formic acid is a colourless, sharp smelling, irritating liquid, bp 100.8°C. It is miscible with water, ethanol, and there. It is very corrosive and causes bumps and blisters on the skin.

Formic acid is unique because it contains both an aldehyde group and a carboxyl group.