The article in your hand p block elements questions and answers primarily meant for graduate and postgraduate students of Chemistry with the intention that they could show better performance during various competitive examinations and interviews held for Civil and Military Services. At the same time it is equally useful for those who desire to be well informed in various disciplines of chemistry. 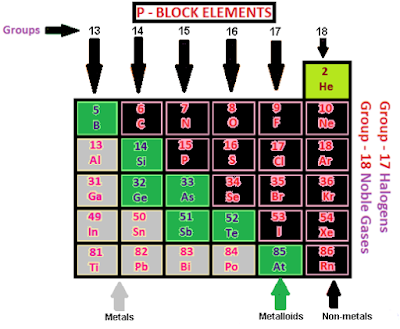 Q1. What are P-block elements?

Elements in which P-orbitals are in the process of filling in order to reach the inert gas configuration are called P block elements. The elements have completely filled ns orbitals and have np1-6 electronic configuration.

Q2. Which periodic groups belong to this block?

Groups IIIA, IVA. VA, VIA, VIIA and zero group belong to this block.

Q3. What is the nature of P-block elements?

Q4. How does electro negativity values vary in P-block elements?

The electro negativity values of P-block elements decreases down the group and increases in a period.

Q6. Why do P-block elements not give characteristic colour in the flame?

The reason is that the excitation energy given out by the electrons, when they come back to ground state, does not appear in the visible region of the spectrum.

Q7. What is the nature of chemical bonding in P-block elements?

Q8. What is the nature of oxides formed by P-block elements?

Group IIIA of the periodic table consists of five elements which Are: Born (B), Aluminium (Al), Gallium (Ga), Indium (In) and Thallium (TI).

Q10. What is the valence-shell electronic configuration of group IIIA?

The valence-shell electronic configuration of group IIIA is ns2p1.

Since boron atom has small sire and high ionization energy, it does not lose all of its valence electrons and hence does not give B+ion. It is for this reason that boron atom combines with other elements through covalent bonds, i.e., boron atom mainly gives covalent compounds.

All the members of this group are metals except boron which is semi-metal.

Some common proportion showing the similarities between B and Si are given below:

Q13. How does boron differ from silicon?

The following points show dissimilarities between boron and silicon.

Q14. Give some uses of boric acid.

Q17. What is the valence shell electronic configuration of group IVA elements?

Q18. How does carbon occur in nature?

Carbon is the only element of this group which occurs in the free state as diamond, graphite and coal.In the combined state, it occurs as hydrocarbons, carbohydrates and carbon dioxide in the atmosphere.

Q21. What is catenation or self-linkage?

Q22. Give some uses of nitric acid.

Q23. What are nitrides and azides?

Q24. Why does nitrogen differ from the other members of this group.

This is because of the following inherent properties of nitrogen: (a) small size (b) higher electronegativity, and (c) non-availability of d-orbitals. The main points of difference are:

Q25. What are the natural methods of nitrogen fixation?

In nature nitrogen is fixed by the following methods.
By lightning discharges.
The nitrogen and oxygen present in air combine together to form nitric oxide under the influence of lightning discharges. Nitric oxide is oxidized by excess of oxygen present in the atmosphere to form nitrogen peroxide which further combines with water to form nitric acid.
By symbiotic bacteria.
The atmospheric nitrogen is being constantly transferred to the soil through the agency of certain bacteria called symbiotic bacteria. These grow in small nodules in roots of plants belonging to the family Leguminaceae (Pea, gram etc.).


Q27. What is microcosmic salt?

Sodium ammonium hydrogen phosphate [Na (NH4 ) HPO4, 4H2 O] is called microcosmic salt since it is present in the urine of the “microcosm” i.e., man.

Q29. What is transition temperature?

It is the temperature at which one allotropic form of a substance changes into other. It has a fixed value for each pair of allotropes.

Q30. What do you know about diamond?

Diamond is the hardest substance known. Among various forms of carbon, diamond is the purest and densest. It has the highest refractive index, 2. 45. This property is responsible for its value as gems.

Koh-i-Noor (mountain of light) is a famous diamond of large size which had the original weight of 186 carats (1 gram = 5 carats) but had to be out down to 106 carats later on.