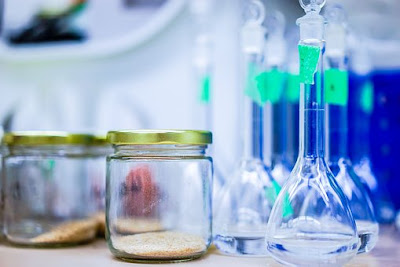 The QnA in your hand solvent extraction questions and answers primarily meant for graduate and postgraduate students of Chemistry with the intention that they could show better performance during various competitive examinations and interviews held for Civil and Military Services. At the same time it is equally useful for those who desire to be well informed in various disciplines of chemistry.

What is the principle of solvent extraction?

Amongst the various methods of separation, solvent extraction also called as liquid-liquid extraction is considered to be most versatile and popular method of separation. It is based on the principle that a solute can distribute itself in a certain ratio between two immiscible or partially miscible solvents such as benzene, water or chloroform.

Why solvent extraction is considered as a useful separation technique?

The main reason for its usefulness is that separations can be carried out on macro-level as well as on micro-level. Moreover, one does not need any sophisticated apparatus or instrumentation except a separatory funnel.

What are the applications of solvent extraction?

This technique can be used for the purpose of preparation. purification, enrichment, separation and analysis on all scales of working.It is an elegant. simple and rapid technique.

What is Nerst distribution law?

When a solute is shaken with two immiscible solvents 1 and 2, the solute distributes itself between these two liquids and a dynamic equilibrium is established:

Where A1, and A2, are the concentrations of the solute A in solvent 1 and 2 respectively. If the solute exists in the same ionic or molecular form in both the solvents. Nerst law states that

Where KD, is a constant at a particular temperature known as distribution or partition constant.

What are the limitations of the distribution law?

1.   The two solvents should be immiscible.
2.   The solutions should be dilute.
3.   Molecular state of the solute should be same in beth the phases.

Write the formula if solute undergoes association in one of the phases?

When a solute undergoes association in one of the phases, then the distribution law is written as

What is distribution ratio (D)?

In the practical applications of solvent extraction we are not interested whether the solute, in any of the solvent, is in the association or dissociated form, but our primary interest is to know the fraction of total solute in one or the other solvent. Hence the term distribution ratio (D) or extraction coefficient (F) is used which is given by.

The most important type of analytical application of solvent extraction involves metal chelates which are readily soluble in organic solvents but only sparingly soluble in water. For example, by adding dimethylglyoxime to an aqueous solution of Ni(11) at pH between 5-12, nickel dimethylglyoxime is quantitatively precipitated which can be extracted with chloroform. The red solution in chloroform so obtained is examined photometrically and the amount of Ni present in the sample solution can be determined.

The two liquids may be brought in contact with one another discretely or continuously, giving rise to three common ways of carrying out an extraction. These are:

In batch extraction, a liquid (usually H2O) containing the dissolved solute sample is shaken with another liquid (usually organic) in a closed container until equilibrium has been established. The two immiscible phases are allowed to settle and separated mechanically. When the value of D for the desired compound is greater that 10 and considerably different from other components of the mixture, a batch extraction is preferred.

The continuous extraction is used when the distribution ratio is relatively small (D<1), so that large number of batch extractions would normally be necessary to affect. quantitative separation. this technique, the extracting liquid (lighter of heavier) is passed continuously through or over the stationary liquid containing the solute. The two phases are the separated physically and one containing unextracted desired solute is again treated for continuous extraction.

In such type of extraction, the solvent and the liquid which is being extracted move continuously
in opposite directions and thus the solute distributes in two oppositely moving phases. When the extraction is complete, the two phases are separated physically. Equilibrium is not attained in this technique.