It is the normal end product of the human metabolism of nitrogen-containing foods (proteins). An adult person excretes about 3 grams of urea in urine in 24 hours.

(1) Urea is made commercially by the reaction of liquid ammonia and carbon dioxide at 150-200°C and about 200 atmospheres pressure. Ammonium carbamate first formed decomposes to form urea.

(2) It can be prepared in the laboratory by the action of ammonia on carbonyl chloride.

(3) Wohler was the first to synthesise urea in 1828 by evaporating a solution of ammonium
cyanate. This method is of historical interest only.

Physical Properties.
Urea is a colorless, crystalline solid, mp 135°C. It is very soluble in water giving neutral solutions. It is less soluble in alcohol and insoluble in ether, chloroform, and benzene.
Chemical Properties.
Urea contains an amide group attached to an amino group and gives reactions of both these functions. It may be thought of as having two amide groups with a common – CO- function.
Thus it behaves as a diamide in most reactions.

Some of the reactions of urea are listed below.
(1) Salt Formation. Urea is a feeble mono acid-base (Kb= 1.5 x 10-14). Thus it reacts with concentrated nitric acid and oxalic acid to form salts.

The above salts contain the oxygen-protonated cation, [HOC(NH2)2]+, which is resonance-stabilized.
(2) Hydrolysis. Like other amides, urea is hydrolysed under both acidic or alkaline conditions to
give ammonia and carbon dioxide. 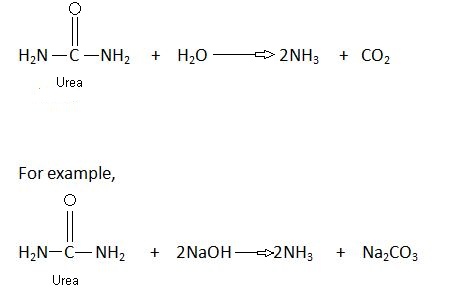 An enzyme called urease, present in soil and soya bean hydrolyzes urea to ammonium carbonate. This reaction is used for the quantitative estimation of urea.
(3) Reaction with HNO2. Urea, like other amides, reacts with nitrous acid when nitrogen is evolved, leaving the carbonic acid behind. This is turn decomposes to carbon dioxide and water.

(4) Reaction with Alkaline Hypohalites. Urea is oidised to nitrogen when it is heated with excess of alkaline hypochlorite or hypobromite (Br2+NaOH).

This reaction is also used to estimate urea by measuring the volume of nitrogen envolved from a test sample.
(5) Acetylation. Urea reacts with acylating agents e.g., acetyl chloride to form N-acyl ureas or ‘ureides’.

(6) Action of Heat. (a) On heating at 132°C, urea melts.Then the liquid on gentle heating at a slightly higher temperature decomposes, liberating ammonia and leaving behind a solid compound known as Biuret.

Urea can be identified by the Biuret Test. The substance is heated, a little above its melting point, in a dry test-tube. Biuret is formed with the evolution of ammonia. When the evolution of ammonia begins to slacken, the residue is dissolved in water and treated with a few drops of sodium hydroxide solution. To the solution is then added a drop of copper sulfate solution, when a violet coloration is produced.
(b) When heated quickly well above its melting point, urea is decomposed to isocyanic acid which trimerizes to cyanuric acid. 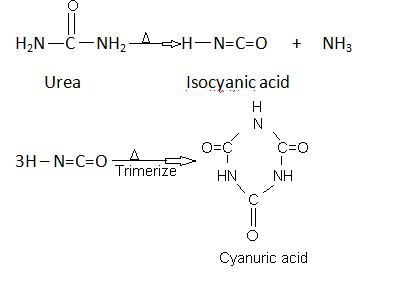 (7) Reaction with Hydrazine. Urea reacts with hydrazine at 100°C to form semicarbazide.

(1) By elemental analysis and molecular weight determination, its molecular formula has been found to be CON2H4.
(2) Diamide formula. Its formation from carbonyl chloride and ammonia indicates that urea has a symmetrical diamide formula.

The diamide formula is confirmed because of urea : (a) upon hydrolysis forms two molecules of
ammonia (b) with nitrous acid it liberates two molecules of N2.
(3) Facts against the Diamide formula. It fails to explain :
(a) Urea forms salts with acids like HCl or HNO3 while simple amides do not.
(b) It forms mono-salts only e.g., CO(NH2)2. HCl, showing that the molecule is unsymmetrical.
(4) Tautomeric Structure Proposed. To explain the facts listed in (3), Chattaway proposed that urea
exists as a tautomeric mixture.

It is the basic imide form which forms a salt with a monobasic acid at the imide group (= NH.HCI).
(5) Resonance Structures. Urea is more stable than could be expected of any carbonic acid derivative. In terms of the modern resonance theory, this stability of urea is attributed to its existence as a resonance hybrid.

(6) Formation of Mono-Salts Explained. The oxygen atom of the carbonyl group of urea is capable of coordinating with one proton (H+). The resulting cation is resonance stabilized by considerable delocalization of the cationic charge.

Thus urea can form mono-salt with an acid like HCl.

X-ray diffraction studies have confirmed that in the crystalline salt of urea with HCl is present an oxonium type cation as shown above.