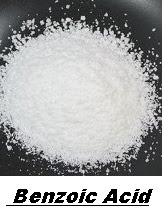 (2) By reaction of phenylmagnesium bromide with carbon dioxide followed by acid-hydrolysis of the addition product.

(3) By acid-hydrolysis of phenyl cyanide (benzonitrile).

Benzoic acid is colourless solid, mp 122ºC. It is soluble in hot water, diethyl ether, ethanol, and benzene. It is steam-volatile, Benzoic acid is a slightly stronger acid than acetic acid (ka = 6.3×10-5; 1.75×10-5). The characteristic carbonyl IR stretching absorption for benzoic acid is found at 1710-1720 cm-1.

The reactions of benzoic acid are those of the carboxyl group and the benzene ring.

Benzoic acid is a organic compound and chemical formula is C7H6O2or C6H5COOH.