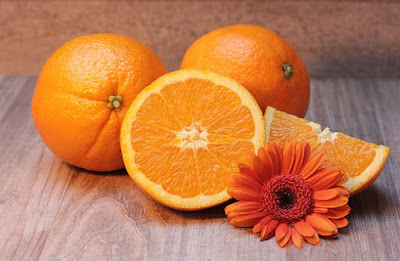 It is the most important acyclic (open chain) monoterpenoid and has the structural formula.

Citral occurs to the extent of 80 per cent in lemon grass oil. It is also present in the oil of citrus fruits (citron, orange, lemon)

Citral is a colourless liquid, bp 224-228°C. It has a strong lemon-like odour. It exhibits geometrical isomerism about the double-bonded carbons carrying CH3 and CHO groups. This cis-isomer is known as citral-a and the trans-isomer citral-b. Ordinary citral obtained from lemon grass oil is, in fact, a mixture of citral-α (90%) and citral-b (10%).

Citral is used extensively in the perfume and flavour industry to simulate lemon-like odour, and for the manufacture of vitamin A. Recently citral has become important as a drug for reducing blood pressure.

Element analysis and molecular weight determinations show that the molecular formula of citral is C10H16O.
Presence of teo C=C. It adds two molecules of bromine to form a tetrabromide, indicating the presence of two carbon-carbon double bonds.

Presence of CHO. It forms an oxime and on oxidation gives geranic acid without loss of any carbon atom.

Carbon skeleton. Simmler (1891) suggested that two isoprene units are joined head-to-tail in citral (Isoprene rule), and its carbon skeleton was.

Position of C=C bonds indicated. The oxidation of citral with alkaline permanganate, followed by chromic acid, gives acetone, levulinic acid, and oxalic acid. This is accountable only if the position of the double bonds is as shown in the formula below.

Position of double bonds confirmed. The above structure of citral is supported by the decomposition of citral with aqueous Na2CO3 to give methylheptenone and acetaldehyde.

Synthesis. Structure of citral was confirmed by the following synthesis from methylheptenone. The various steps are