It is acyclic terpene alcohol and has the structure:

Geraniol occurs in oils of rose, palmarosa, geranium, citronella, lemongrass, and lavender.
Preparation of Geraniol.
(1) From palmarosa Oil. This is obtained cheaply from a wild-growing grass, Cymbopogon Martini, by steam distillation. When the oil is treated with anhydrous calcium chloride, geraniol reacts with it to give a crystalline addition product. This is separated and decomposed with water to liberate geraniol.

(2) From Citral-a. Geraniol may also be prepared by reduction of citral-a (geraniol) with aluminium amalgam.

The structural formula of geraniol has two carbon-carbon double bonds and a primary alcohol group. Thus it gives the reactions of dienes as also of primary alcohols. Two of its important reactions are listed below.

(1) Oxidation. Upon oxidation, geraniol is first converted citral-a and then to geranic acid.

Geraniol and nerol are extensively used in perfumery to stimulate the odour of roses.

Presence of CH2OH. On oxidation, it gives an aldehyde (citral-a) and then an acid (geranic acid) containing the same number of carbon atoms as geraniol.

This proves that geraniol is a primary alcohol and the arrangement of C atoms as also the positions of the two double bonds are the same as in Citral-a.
Structure derived from that of citral. Knowing the structural formula of citral-a, geraniol is assigned the structure. 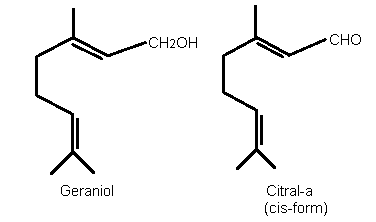 Therefore, geraniol is also the cis-form which is confirmed by NMR studies.