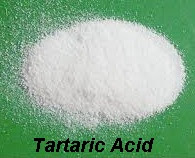 The calcium tartarate obtained in the two steps is treated with a calculated quantity of dilute H2SO4 to liberate tartaric acid. The calcium sulphate precipitate that is formed is removed by filtration, and the filtrate concentrated by evaporation to get the crystals of tartaric acid.

Preparation from maleic acid. Maleic acid produced industrially by oxidation of cyclohexane is treated with alkaline KMnO4 to get meso-tartaric acid.

Physical properties of tartaric acid. Tartaric acid is a white crystalline substance, mp 171 °C, having acidic taste. It is soluble in water and alcohol, but sparingly so in ether. Since it has two asymmetric carbon atoms, tartaric acid shows optical isomerism. The natural tartaric acid is the dextro variety, α =+ 12.7.

Reduction. When heated with Hl, tartaric acid is reduced to malic acid then succinic acid.

Oxidation. (i) On oxidation with HNO3 it is converted to tartonic acid and then oxalic acid.

(6) Formation of complexes. In fehling solution ( CuSO4 + sodium potassium + NaOH) the soluble copper hydroxide first formed dissolves due to the formation of a soluble complex,