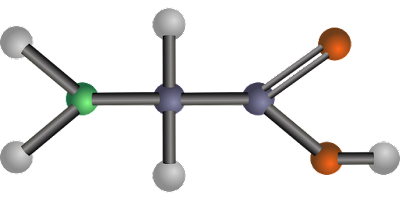 Amino acids are the building blocks of the molecular structure of the important and very complex class of compounds known as proteins. The proteins on hydrolysis yield mixtures of the component amino acids. Therefore, to understand the structure and chemistry of proteins, we have to first undertake the study of amino acids.

Where R may be H, alkyl group, or may be quite complex containing other functional groups.

REACTION OF THE CARBOXYL GROUP.
(1) Salt Formation With NaOH.

It is so named because of its sweet taste (Greek, glycys = sweet).
Preparation of glycine.
Glycine may be readily obtained in the laboratory by treating chloroacetic acid with concentrated ammonium hydroxide solution.

A sample of pure glycine can also be prepared by Gabriel Phthalimide Synthesis.
Properties of glycine.
Glycine is white crystalline substance, mp 235°C with decomposition. It is very soluble in water but insoluble in ethanol and ether. Its aqueous solutions are neutral owing to the formation of Zwitterion.

It gives all the general reactions of α-amino acids already discussed.