Weighing is a required part of almost any analysis, both for measuring the sample and for preparing standard solutions. In analytical chemistry we deal with rather small weights, on the order of a few grams to a few milligrams or less. Standard laboratory weighings are typically made to three or four signiﬁcant ﬁgures, and so the weighing. 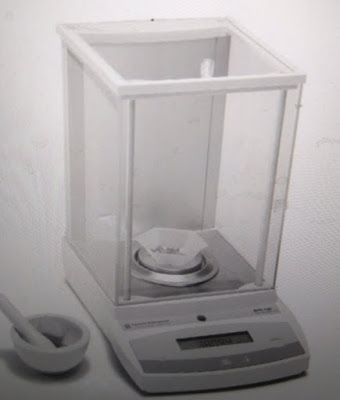 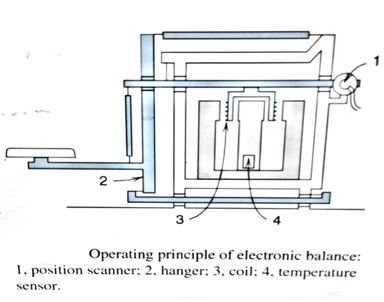 The operating principle of an electronic balance is illustrated in Figure 2. There are no weights or knife edges as with mechanical balances. The pan sits on the arm of a movable hanger (2), and this movable system is compensated by a constant electromagnetic force. The position of the hanger is monitored by an electrical position scanner (1), which brings the weighing system back to the zero position. The compensation current is proportional to the mass placed on the pan. This is sent in digital form to a microprocessor that converts it into the corresponding weight value, which appears as a digital display. The weight of the container can be automatically subtracted. These balances use the principle of electromagnetic force compensation ﬁrst described by Angstromin 1895.But they still use the principle of comparing one weight with another. The balance is “zeroed,” or calibrated, with a known weight.

When the sample is placed on the pan, its weight is electronically compared with the known. This is a form of self calibration. Modern balances may have such features as compensating for wandering from true zero and averaging variations due to building vibrations. A single control bar is used to switch the balance on and off, to set the display to zero, and to automatically tare a container on the pan. Since results are available as an electrical signal, they can be readily processed by a personal computer and stored Weighing statistics can be automatically calculated.

Electronic analytical balances can be purchased with different weighing ranges and readabilities. A standard analytical balance typically has a maximum capacity of 160–300g and a readability of 0.1mg. Semimicro balances (readability 0.01mg, capacity up to 200g), microbalances (readability 1 μg, capacity up to 30g) and ultramicro balances (readability 0.1 μg, capacity up to 2g) are currently commercially available. Electrochemical quartz balances are available with 100-μg range that can detect 1 ng(10−9 g) changes! The balance utilizes a thin quartz crystal disk oscillating at for example, 10MHz. The frequency of oscillation changes with any change in mass, and the frequency change measured by the instrument is converted to mass units. A ﬁlm of gold is evaporated on the quartz, and the gold substrate can be coated with the material of interest. Mass changes as small as a few percent of a monolayer coverage of atoms or molecules on the gold surface can be measured. Mass changes with time can be recorded. Such balances are incorporated in air particle mass monitors.

The zero setting of a balance is not a constant that can be determined or set and forgotten. It will drift for a number of reasons, including temperature changes, humidity, and static electricity. The zero setting should therefore be checked at least once every half-hour during the period of using the balance.