Acetic anhydride, Ethanoic anhydride, is a chemical compound and formula is (CH₃CO)₂O.which is a colorless liquid with a strong smell and odor similar to vinegar. It is the anhydride corresponding to acetic acid. 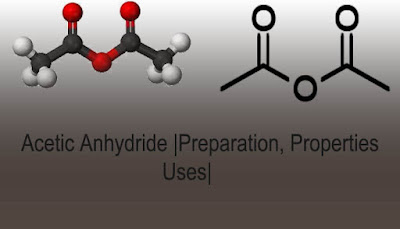 Preparation of Acetic Anhydride. It may be prepared :
(1) By distilling a mixture of anhydrous sodium acetate and acetyl chloride. (Laboratory Method)

(2) By air-oxidation of acetaldehyde in the presence of Co-Cu-Acetates at 50-70°C under pressure. (Industrial Method)

(3) By treating ketene with acetic acid.

The ketene is produced by dehydration of acetic acid using triethyl phosphate as a catalyst at 700°C under reduced pressure.

Acetic anhydride is a colorless liquid, 139.9°C, sp gr 1.083. It has a pungent sharp odor. It is sparingly soluble in cold water but miscible with alcohol, acetic acid, and ether. It gives reactions parallel to those of acetyl chloride, although less vigorously. These have been discussed under the general treatment.

Acetic anhydride is usually a more satisfactory Acetylating Agent than acetyl chloride. As such it is used in the preparation of medicines (aspirin) and plastics (cellulose acetate, vinyl acetate).