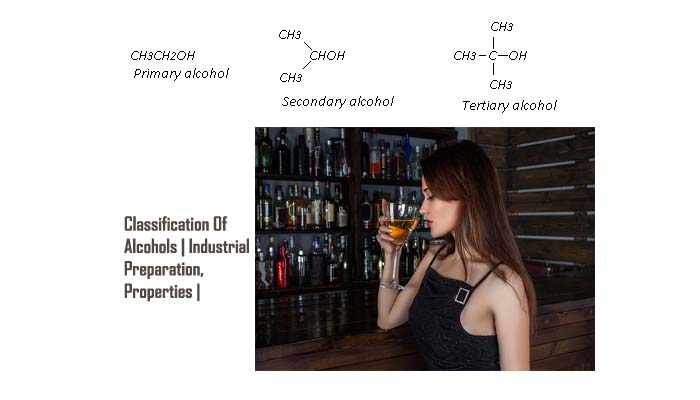 Monohydric alcohols are further classified as primary (prim-), secondary (sec-) and tertiary (tert-) alcohols depending on whether the – OH group is attached to a primary, secondary or a tertiary carbon atom.

Method Of Preparation Of Alcohols.

2. Hydration of Alkenes.
The acid-catalyzed addition of water to an alkene gives alcohol. The acids most commonly to catalyze the hydration of alkenes are sulphuric acid and phosphoric acid. The addition of water to the double bond follows Markovnikov’s rule. Alkenes react with sulphuric acid to produce alkyl hydrogen sulfates which on dilution with water followed by heating are hydrolyzed to alcohols.

Acid-catalyzed hydration of alkenes does not yield primary alcohols except ethanol. It yields only secondary and tertiary alcohols. This method is generally used for the production of alcohols on the industrial scale.
3. Hydration through Hydroboration.
Diborane, B2H6, adds to an alkene double bond with the boron atom becoming attached to the less substituted carbon to form trialkyl boranes, which on oxidation with H2O2, in the aqueous base give alcohols. Diborane adds as borane, BH3. Hydroboration reactions are usually carried out in diethyl ether or in tetrahydrofuran (THF). The result is an addition of -H and -OH with the -OH being attached to the least substituted carbon (anti-Markovnikov addition of water to double bond).

4. By Oxymercuration – Demercuration. The addition of water to an alkene can be achieved indirectly through oxymercuration – demercuration. Alkenes react with mercuric acetate in a water-tetrahydrofuran solution to form hydroxyalkylmercury compounds which on reduction with NaBH4 yield alcohols. The net result of the two steps is Markovnikov addition of -H and -OH. 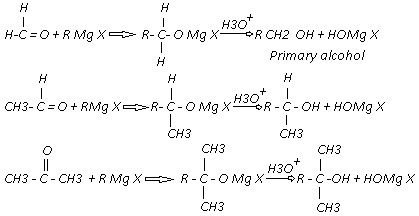 6. By the action of Grignard reagent on epoxides. Grignard reagents react with ethylene oxide (epoxide) to give an additional product which on hydrolysis yields primary alcohol.

if present in the molecule.

Sodium borohydride (NaBH4) is insoluble in ether but is stable in aqueous solution (LiAlH4, is destroyed by water). It is therefore generally used for the reduction of water-soluble aldehydes, and ketones. NaBH4, is much less reactive and therefore more selective and reduces only aldehydes and ketones.

Manufacture of Methanol. At one time, most methanol was produced by the destructive distillation of wood and therefore, was called “wood alcohol”. Today most methanol is manufactured from methane obtained from natural gas. Methane gas is passed with steam over Ni under pressure and at a temperature of 900°C.

The mixture of CO and H2 gases is passed over a heated copper catalyst under pressure to produce methanol.

Manufacture of Ethanol. Ethanol is the alcohol of wine, beer, whiskey, and similar beverages and can be made by the fermentation of sugars in the presence of yeast.
The main sources of sugars are molasses (waste from cane-sugar industries). The molasses is diluted with water so that the concentration of sugar comes down to about 10%. It is boiled and acid is added till its pH becomes 4. This solution known as a wart, is mixed with yeast and kept at 35°C in large tanks. The following reactions are involved in the fermentation of sugars.

If the source for sugar is starch, then the starchy materials are converted into a mash that is treated with malt, from germinating barley and contains the enzyme diastase. This enzyme converts starch into maltose which is then subjected to fermentation with yeast to get ethanol.

The crude alcohol thus obtained is subjected to fractional distillation whereby 95% ethanol called ‘rectified spirit’ is obtained. To obtain 100% pure ethanol, called as absolute alcohol, it is mixed with benzene. Benzene forms an azeotrope with ethanol and water. Azeotropic distillation of the mixture gives three major fractions. The first fraction contains a mixture of Benzene, ethanol, and water, the second fraction contains and ends the final fraction is pure ethanol.
Most ethanol for industrial purposes is produced by the acid-catalyzed hydration of ethene.

Lower alcohols are colorless, toxic liquids and are miscible with water in all proportions. Their water solubility may be attributed to intermolecular hydrogen bonding between the molecules of alcohols and water. But with the increase in the number of carbon atoms, the solubility of alcohols in water gradually. Among isomeric alcohols, the solubility increases with the increase in branching. For example, tert – butyl alcohol is completely miscible with water. but the other three butyl alcohol is are only moderately soluble in water.

Chemical reactions of alcohols involve either O-H or C-O bond cleavage. Some of the important reactions of alcohols are described below.
1. Reaction with Active Metals (Alcohols as Acids).
Alcohol reacts with active metals like Na, K or Mg to form alkoxides with the evolution of hydrogen gas.

The above reactions show that alcohols are acidic in nature. This is because that the O – H bond in alcohols is polar and allows the release of the hydrogen atom as proton (H+). However, alcohols are slightly weaker acids than water. This is because the alkyl groups in alcohols have an electron – releasing inductive effect. They release electrons towards the oxygen atom so that it becomes negatively charged. This negative charge on oxygen makes the release of positive proton more difficult. The order of acidity of alcohols is methyl > primary > secondary > tertiary alcohol.
2. Reaction with Acid Halides and Acid Anhydrides (Acetylation).
Alcohol reacts with acid halides and acid anhydrides to form esters.

Conc, H2SO4 acts as a protonating agent as well as a dehydrating agent. Only primary alcohols genie good yields of esters. Steric hindrance is an important factor is esterification. A highly branched alkyl group is either the alcohol or the acid will slow down the rate of esterification and also shift the equilibrium more to the left side of the esterification reaction. The order of reactivity of alcohol with given organic acid is, therefore, as Primary Alcohol > Secondary Alcohol > Tertiary alcohol.
The Mechanism of esterification is as follows: