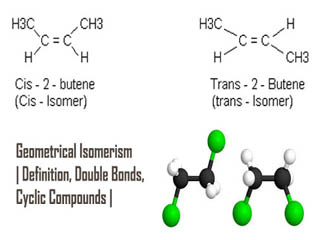 ‘Geometrical Isomerism’ (also called cis-trans isomerism) results from a restriction in rotation about double bonds or about single bonds in cyclic compounds.

The carbon atoms of the carbon-carbon double bond are hybridized. The C – C double bond consists of a σ (sigma) and a π (pi) bond. The σ bond is formed by the overlap of hybrid orbitals. The π bond is formed by the overlap of p orbitals. The maximum overlap between the p orbitals to form a π bond occurs when the p orbitals are exactly parallel. If we rotate one carbon of the double bond to 90, the p orbitals become perpendicular to each other, and then there is no net overlap between them. As a result, the π bond breaks, and only the σ bond remains. Therefore, neither of the doubly bonded carbon atoms can be rotated about the double bond without breaking the π bond. The strength of the π bond is 263 kj/ mol which is the barrier to rotation about the double bond. This energy barrier is markedly higher than the thermal energy available to molecules at room temperature. The rotation about carbon-carbon double bond in therefore restricted.
The restriction of rotation about the carbon-carbon double bond is responsible for geometrical isomerism in alkenes. Consider, the molecule of 2-butene which exists in two geometrical isomer and are distinguished from each other by the terms cis and trans.

Geometrical Isomerism With Other Double Bonds.

Geometrical isomerism also exists in molecules that process carbon-nitrogen,nitrogen-nitrogen double bonds. Oximes (of aldehydes and unsymmetrical ketones) and azobenzenes are atypical examples. In nomenclature, the prefixes syn and anti are adapted instead of cis and trans. In the syn-oxime the hydroxy group on nitrogen and hydrogen on the carbon are on the same side and in anti-isomer are on the opposite side.

Geometrical isomerism is also possible when any two carbons of a cyclic compound have substituents on them, each has two different groups. There can be no rotation about C-C single bonds forming a ring because rotation would break the bonds and break the ring. If the substituents are on the same side, then it is cis -, if on the opposite side, then it is trans -. An example of cis-trans isomerism in cyclic compounds is given below. 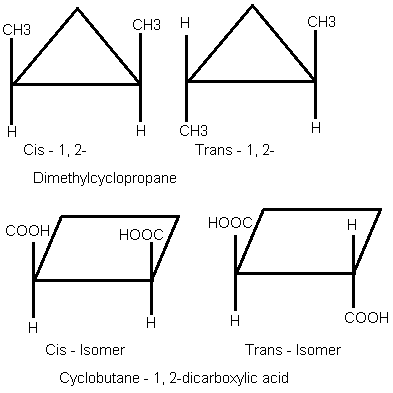 Sometimes, a double bond may be present in a ring. In small rings (eyclopropene to cycloheptene) the double bonds are so constrained that they must be cis. The cyclooctene ring is large enough to permit the trans isomers to exist and for rings larger than 10 -membered, the trans isomers are more stable.

The system of nomenclature cis and trans of geometrical works very well for alkenes in which both carbons of the double bond have two identical groups. However, when there are three or four different groups attached to carbon atoms of the double bond, it is difficult to assign cis or trans designations to the geometrical isomers. To remove this difficulty, a new system of nomenclature called the (E) – (Z) system based on the Cahn-Ingold-Prelog sequence rules originally applied to chiral molecules and is applicable to all cases of geometrical isomerism. According to this system, the two groups on each carbon of the double bond are ranked in order of priority. as was done in the case of chiral molecules. If both the groups of higher priority are on the same side of the double bond, the geometrical isomer is designated as Z (from the German word Zusammen meaning together), if on the opposite sides, then it is designated as E (from the German word entgegen meaning opposite). A few examples are given below: 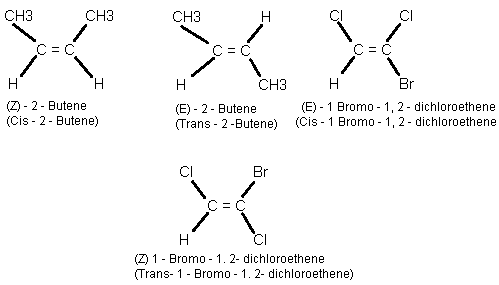 Note that the prefixes Z and E do not necessarily correspond to the cis and trans respectively.