Pyrrole is an important five-membered heterocyclic compound because many naturally occurring substances contain the pyrrole ring e.g., chlorophyll, hemoglobin, and some of the alkaloids. 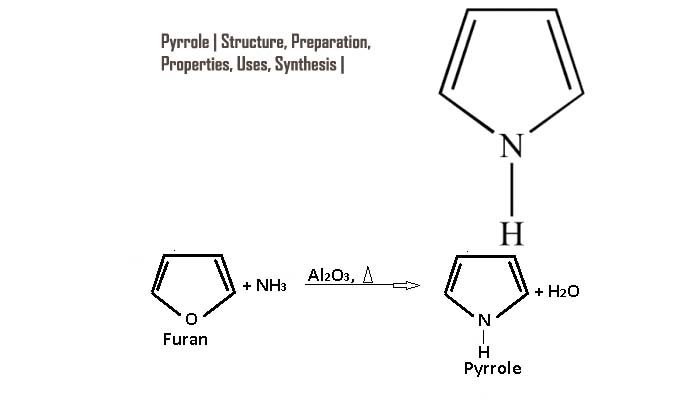 Pyrrole occurs in coal-tar and bone oil. The bone oil is obtained by the dry distillation or pyrolysis, of animal by-products such as horns, hooves, and bones. Pyrrole may be isolated from bone oil by first washing it with dilute H2SO4 to remove the basic substances, and then with dilute alkali: to remove the acidic substances. It is next subjected to fractional distillation. The fraction passing over between 100 to 150°C contains Pyrrole, which may be removed by boiling with KOH. The potassium salt is formed which on steam distillation gives pyrrole. This finally purified by distillation.

1. On Commercial Scale,  pyrrole can be manufactured by passing a mixture of furan, ammonia, and steam overheated alumina (catalyst).

2. In the Laboratory, Pyrrole is prepared by heating diammonium mucate with glycerol at 200 °C.

3. Pyrrole is formed on distilling succinimide with zinc dust.

4. Pyrrole may be synthesized by passing acetylene with ammonia through a red hot tube.

5. By warming succinic dialdehyde with ammonia.

Pyrrole has a planar pentagonal structure in which each of the ring atoms (four carbon and one nitrogen) is linked to three other atoms (two adjacent ring atoms and hydrogen) by a σ bond, and is thus Sp2 hybridized. This leaves one unhybridized p orbital on each ring atom, which is perpendicular to the plane of the ring and parallel to other p orbitals. After contributing one electron to each of the three o bonds each carbon atom of the ring is left with one electron to occupy the p orbital. The five p orbitals of the ring atoms overlap sidewise to form a cyclic π molecular orbital containing six π electrons (опе from each carbon and two from nitrogen) The delocalized six π electrons are often referred to as the aromatic sextet. The stabilization of the ring system due to the delocalization of the six electrons causes it to be aromatic. The pyrrole is an aromatic compound because six electrons fit Huckel’s 4 n + 2 rule (n=1), which is extended to include heteroatoms.

A common shorthand representation of pyrrole is simply pentagon, a five-membered ring, with a circle. The circle represents, the π molecular orbital.
The structure of pyrrole can also be described as a resonance hybrid of the following structures, involving delocalization of the lone pair of electron of nitrogen around the ring.

The nitrogen in pyrrole is more electronegative than carbon, therefore, the molecule has bipolar structure Dipolar structures make important contributions to the resonance hybrid of the substance. The charge distribution in the pyrrole provides the carbon portion of the nucleus with a partial negative charge and nitrogen atom with a positive charge and accounts for the dipole moments of the pyrrole.
The stability. of the pyrrole ring is due to the delocalization of the π electrons. The stability of the ring is reflected by its abnormally low heat of combustion and its capacity to undergo substitution reactions.
The resonance stabilization energy as calculated from heats of combustion for pyrrole is about 105 KJ/mol. Although this resonance stabilization energy is Somewhat less than that of benzene which is 150. 5 KJ/mol. Both resonance and molecular orbital methods suggest that the structure of the pyrrole resembles that of benzene. Thus pyrrole gives electrophilic aromatic substitution reactions more readily than benzene.

Although pyrrole is an amine, it is not basic. The unshared pair of electrons, which is normally responsible for the usual basicity of amines, is delocalized in an “aromatic sextet”, and is not available for bonding to a proton. Adding air acid to pyrrole could prevent delocalization and could destroy the aromaticity. However, aqueous solution, aromatic heterocyclic amines such as pyrrole and pyridine are much weaker bases than nonaromatic amines or ammonia Hence, pyrrole is an extremely weak base.

The resonance hybrid structure of pyrrole shows that the pyrrole ring is electron-rich and therefore it can undergo electrophilic substitution reactions like benzene and phenol.
Because of resonance energy, the pyrrole tends to revert to aromatic after the reaction. Thus pyrrole undergoes electrophilic substitution rather than addition reactions. Because of the greater electron density at the ring carbon atoms, the pyrrole acts as a nucleophile and more reactive than benzene. The situation is analogous to the phenols. The order of reactivity of pyrrole, benzene, and phenol towards an electrophile is phenol > pyrrole > benzene.

Pyrrole is a colorless liquid, b.p. 131°C, which rapidly turns brown on exposure to air. Its odor is like that of chloroform. It is sparingly soluble in water but readily soluble in ethanol and ether.

Pyrrole is a weak base (pKa = 3.4). It reacts with dilute hydrochloric acid to give crystalline hydrochloride. This salt is stable in the absence of oxygen; otherwise, polymerization rapidly occurs to produce a brown resin. The reason for the weak basic character of pyrrole is that the lone pair of electrons on nitrogen is involved in the formation of the delocalized π molecular orbital and is not available for the formation of a new bond with a proton. Furthermore, if a proton is added to the nitrogen atom by reaction with an acid, the resulting structure ceases to be aromatic and the resonance energy is lost. This makes the pyrrole cation very unstable in comparison to the free pyrrole and indicates why pyrrole is a weak base. Also, the Pyrrole cation behaves as a typically conjugated diene and undergoes polymerization readily.

Pyrrole is not only a weak base but also a very weak acid  (pKa =15), and forms a salt with potassium hydroxide; the imino hydrogen ins replaced by potassium.

The reason for the acidic character of pyrrole is that the electron pair delocalization from nitrogen makes it positively charged and the increases the possibility of proton abstraction giving pyrrole anion. Furthermore, the pyrrole anion is stabilized by delocalization of the negative charge over the ring, and pyrrole anion has greater stability than pyrrole itself because, unlike pyrrole, there is no charge separation in the pyrrole anion, as is apparent from the following resonance structures:

The acidic character of pyrrole is also evident from its reaction with methyl magnesium bromide to form a salt-like Grignard reagent.

Paal – Knorr synthesis. A pyrrole derivative can be prepared by treating 1,4- diketone with ammonia or primary amine.

Pyrrole itself is prepared from succinaldehyde and ammonia.

Knorr Pyrrole synthesis. This synthesis involves the condensation of an α- aminoketone or α- amino-β-keto ester with a ketone or keto ester in the presence of an acid or base to give pyrrole derivative.

Hantzsch synthesis. This synthesis involves the condensation between chloroacetone and β-ketoester in the presence of ammonia.