What is Uric Acid? 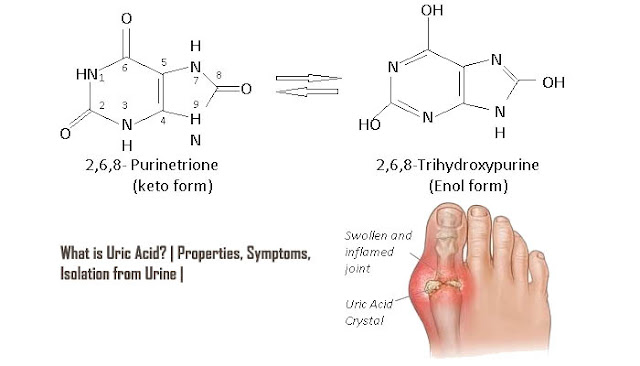 Uric acid is also known as 2,6,8-Purinetrione, is a chemical compound that is naturally present in the body. It is the final product of the metabolism of purine in humans. The acid is composed of carbon, oxygen, nitrogen, and hydrogen, and is produced by the liver into the blood, while the kidney is transferred to the urine. Purine is found in some high protein-rich foods such as red meat and its products from liver and kidney, Like the Chicken, grains, and legumes (such as lentils, oats, chickpeas, and beans), and in some seafood such as sardines, mackerel, and other fish, shellfish and shrimp, alcohol may also play a serious role in raising the proportion of uric acid.
This most important derivative of purine is, in fact, a mixture of two tautomeric forms.

Absorption spectra studies have shown that the keto form dominates.

Uric acid is the chief constituent of the solid excrement of birds, reptiles, and insects. The natural accumulation of sea birds’ excrement found on certain islands, is a rich source of uric acid. Uric acid is produced in humans by the degradation of proteins that constitute the tissues and muscles. Normally small amounts of uric acid (up to 0.3g/100 ml) are present in the blood. It is excreted in the urine, about 0.7 g/24 hours. Any excess of uric acid formed in the blood is deposited in joints as crystals of monosodium urate, causing gout, or kidney stones may form.

Human urine contains small amounts of uric acid and its salts (Na or NH4– urates). It is evaporated to get a concentrated solution and then strong hydrochloric acid is added. Thus the rates are decomposed to form free uric acid which precipitates on cooling. The total solid mass is recrystallized from hot water to give pure uric acid.

Uric acid is produced on a large scale from Guano (the sea birds excrement) which is largely ammonium urate. This is powdered and boiled with sodium hydroxide solution until the evolution of ammonia ceases. The hot solution of sodium urate so obtained is filtered and poured into hydrochloric acid.

The uric acid separates as a fine crystalline mass on allowing the solution to stand in cold. It is filtered and dried in air.

Physical Properties of Uric Acid. Uric acid is a colorless, crystalline solid having no taste or smell. It is
decomposed on heating above 400°C and it has no melting point. It is very sparingly soluble in hot
water and insoluble in cold water or organic solvents.
Chemical Properties of Uric Acid. (1) Formation of salts. Uric acid is a weak dibasic acid. Thus it reacts with sodium, ammonium, or lithium hydroxide to form two series of salts e.g., monosodium and disodium urate. Which of the two acidic OH groups in 2.6.8-trihydroxypurine give the disodium salt. is not yet certain. While the sodium and ammonium urates are sparingly soluble in water, lithium urate is freely
soluble. That is why ‘lithiated water‘ is often used as a remedy to secure the elimination of uric acid
from the system of patients suffering from gout.
(2) Reaction with POCl3. Uric acid reacts with phosphoryl chloride from 2,6,8 trichloropurine which shows the presence of three OH groups in its molecule.

(3) Murexide Test. This reaction is used to detect uric acid. A little dilute nitric acid is added to a few crystals of uric acid and the reaction mixture evaporated to dryness. The residue becomes purple on the addition of ammonia due to the formation of Murexide, the ammonium salt of purpuric acid. 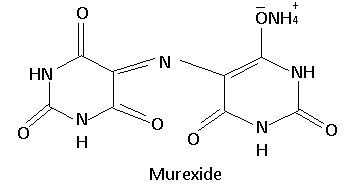 What is Uric Acid Symptoms?

There are certain symptoms of increased uric acid in the blood. Many of the disorders that are medically attributed to certain cases result in too much uric acid. The most important of these symptoms are.

The pain of the joints:

The appearance of pain or inflammation of one of the joints, such as elbow, knee, or foot, and when neglected can lead to high blood pressure followed by crystals around the joints.

High cholesterol and fat in the bloodstream above the normal level.

Low Blood Pressure Reaching levels that may be hazardous to health.

3 Comments on “What is Uric Acid? | Properties, Symptoms, Isolation from Urine |”