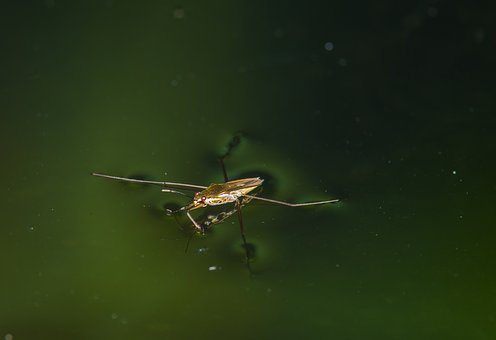 “Definition of Surface Tension” The molecules of a liquid at its surface feel different forces of attractions than those molecules, which are in the interior of the liquid. A molecule lying inside the liquid is surrounded by other molecules and is attracted in all the directions. The net force of attraction is zero. The molecule lying at the surface experiences a net inward attraction. So, the surface behaves as if it is under tension. This property of liquid is called surface tension. Following diagram (1) makes the idea clear. 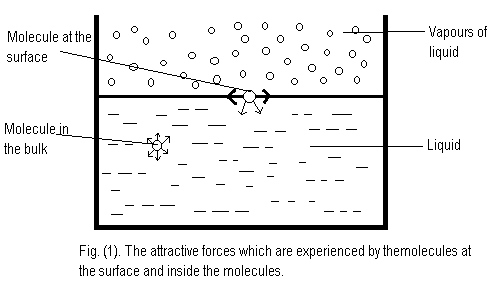 ‘Surface Energy’ In order to understand the surface energy, take into consideration the first definition of surface tension. When we increase the surface area of the liquid, some work has to be done against the inward pull. For that purpose, consider a solution film contained in rectangular wire form A, B, C, D, in which the side AB is moveable Fig. (2). 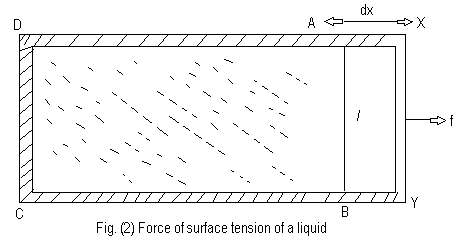 In order to extend the surface area of the film, the moveable wire has to be pulled to position XY. For this change, work has to be done against the “surface tension”,

Where ‘γ’ is a constant of proportionality and is called surface tension.

The phenomenon of surface tension is responsible for

Take two immiscible or partially miscible liquids in a vessel. A force of surface tension is acting along their surface of separation. This is called ‘interfacial tension’. Its value is generally intermediate between the surface tension of two liquids. But sometimes, it is less than both. The reason for this is that at the interface the molecules of a liquid are attracted by the molecules of the other.

“Measurement of surface tension” This method is also known as a stalagmometric method. A stalagmometer is a glass tube with a bulb at the center as shown in the figure. Relative surface tension is measured with water. water is first sucked up into the tube and the drops are counted as the surface falls from A to B. Then the liquid under study is taken in the stalagmometer and the drops are counted as the meniscus travels from A to B. Surface tension of the liquid is determined by applying the formula: 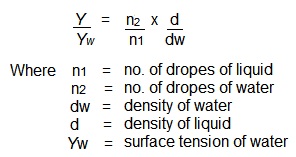 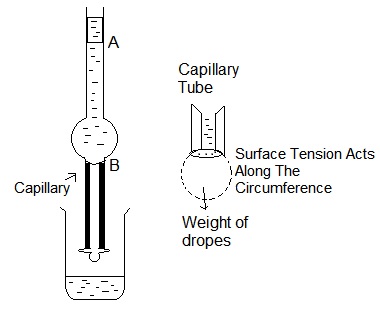