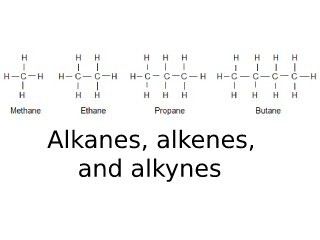 Alkanes, also known as paraffin, have the general formula CnH2n+2. Since the valency of carbon atoms, in their formulas, is completely satisfied, alkanes are known as saturated hydrocarbons. By increasing ‘n’ gradually we obtain the formulas of a series of compounds in which every member differs from its immediate neighbor by the one-CH2 group. Such a series is known as a Homologous series.
The first four members of this series are gases with the following structures.

Methane, CH4  the first and the simplest hydrocarbon, is a principal constituent of Natural Gas which is widely used as fuel. The next higher homologues,i.e., pentane, hexane, heptane, octane, nonane, and decane are liquids and the still higher members are waxy solids.

Alkenes, general formula CnH2n, are another family of aliphatic hydrocarbons with two hydrogen atoms per molecule less than the corresponding alkanes. For this reason, alkenes are called unsaturated hydrocarbons. An alkene can, therefore, be converted to the corresponding saturated hydrocarbon, an alkane, by addition of one molar equivalent of hydrogen.
The first member of alkene series has the formula, C2H4, and is commonly known as ethylene. Each member of the alkene series has one carbon-carbon double bond in their molecules to satisfy the fourth valency of carbon.

Alkynes constitute another family of unsaturated hydrocarbons with the general formula CnH2n-2; thus each member of alkyne family has two atoms of hydrogen fewer than the corresponding member of alkene family and consequently, all alkynes contain a triple bond in their molecule.
The common name of the first member of the alkyne series is acetylene. It has molecular formula C2H2 and has a linear structure H-C≡C-H, which consists of a σ  bond and two π bonds.