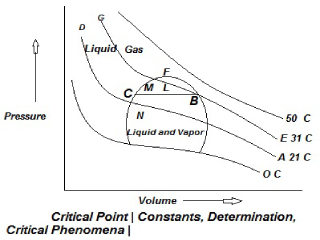 Critical temperature and pressure can be measured with Cagniard’s apparatus. It is a U-shaped glass tube with a bulb at the lower end. The liquid is contained in the bulb and the rest of the apparatus is filled with mercury and the upper and of the bulb is sealed leaving a little air in it. The temperature of the bulb is raised gradually. A point reaches when the liquid disappears and a homogeneous mixture of vapors and air is left in it. On cooling this mixture, a mist first forms and the liquid appear quickly. 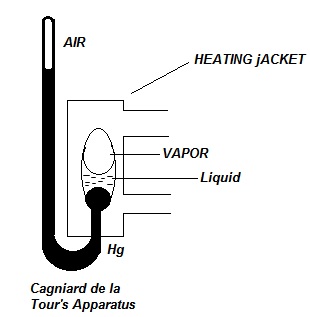 The mean of the temperature of the disappearance and reappearance of the liquid in the bulb is critical temperature. The pressure read on the manometer is “critical pressure”. 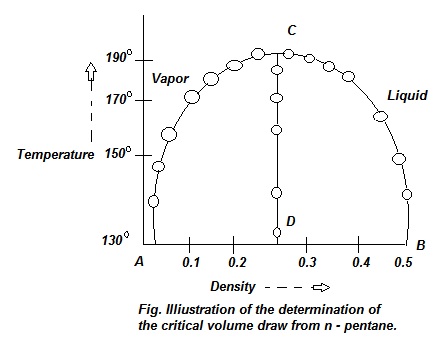 The essential conditions for the liquefaction of gas were discovered by T. Andrew. He made the determination with CO2 at various temperatures.

At point F, there exists an equilibrium between the gas and liquid, and it exists in a vapor state. “The state of a gas when it is present in vapor state at definite temperature and pressure is called the critical state“.

The point F is called a critical point and the isotherm passing through it is called critical isotherm. 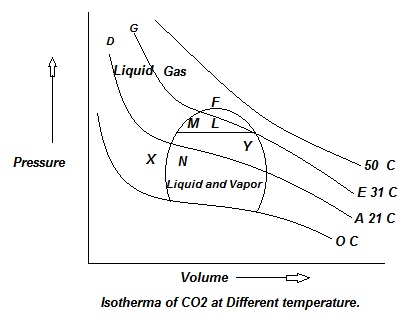