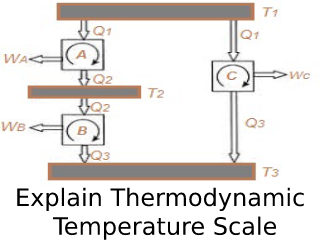 Temperature scales generally depend on the thermal expansion of a gas or mercury. Since the coefficients of expansion are not constant over a range of temperature, the scales carry uncertainty. In order to overcome this difficulty, Lord Kelvin suggested the thermodynamic temperature scale which is based upon the efficiency of a reversible machine.
Suppose there are two constant temperature heat reservoirs and a reversible machine operates between them, one acting as source and the other as the sink. The temperature of each reservoir on the new scale is then defined as ” proportional to the quantity of heat transferred to or from it in the reversible cycle”. If Q2 is the heat transfer in the at a higher temperature and ‘-Q1‘ that at a lower temperature; then the respective temperature on the thermodynamic scale is θ2 and θ1, given by

In this way, the ration of the two temperature is defined in a manner independent of nature of any particular thermodynamic substance.


The position of the zero on the Kelvin scale may be derived as :

Invert equation (i) and subtract the result from unity. Thus

Therefore, zero of the Kelvin scale is the temperature of the sink for a reversible machine with an efficiency of unity, that is, the machine capable of converting heat completely into work. It is possible only at the absolute zero on the ideal scale of temperature, it follows that the Kelvin scale and the gas scale, are really the same. Because of this identity, temperatures on the absolute scale, in which the melting point of ice is taken as 273.16°, C are referred to as degrees Kelvin and represented by K.