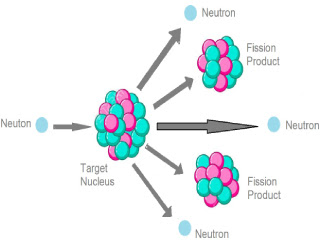 “This is the breaking down of heavy nuclei into fragments, with a moving neutron”. A fission reaction requires neutron to initiate.

very heavy nuclei have lower binding energy than nuclei with intermediate-mass, around 60 a.m.u. The heavy nuclei are thus less stable. If a heavy nucleus is bombarded with high energy neutrons, the target nucleus splits into two smaller nuclei, known a fission fragments. This is called fission. It is usually accompanied by the emission of the neutron. The pattern of fission is variable even for the same nucleus e.g., 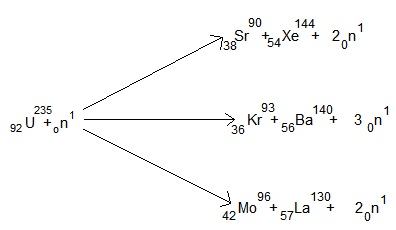 Each fission results in a loss in a mass of 0.22 mass units. The energy released due to this loss of mass is approximately 200 MeV per fission. Since two or more neutrons are emitted from every single uranium – 235, a Nuclear Chain reaction is initiated. The complete chain reaction and loss of energy take place in less than 1 x 106 seconds.
However, this does not occur for small amounts of the mass of fissionable material. The minimum mass required for fission to occur is called critical mass. 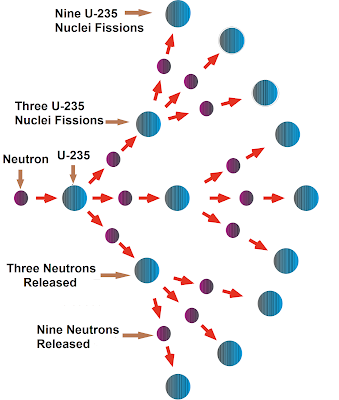 “This is the fusing together of nuclei of light atoms to form heavy nuclei”. e.g.,

This process releases an enormous amount of energy. Since nuclei repel each other, energy is required to start these reactions. This energy is taken from a fission reaction.

The light nuclei as 1H1, 1H2 are less stable. The fusion of two light nuclei results in a more stable nucleus, and the extra energy is liberated. A small atomic (fission) bomb is used to start the fusion reactions in the hydrogen and nitrogen bombs.

The atom bomb is a device which releases energy due to fission reaction occurring in it. The energy is about one million times greater than an equal weight of chemical high explosive as TNT.
The atomic bomb contains two subcritical masses of a fissionable isotope as plutonium – 239. These are propelled towards each other and their collision results in a nuclear explosion. 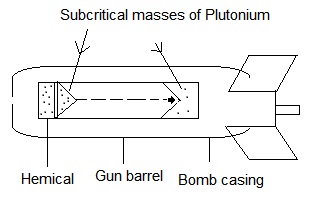 The tritium bomb uses the fusion of tritium and deuterium.

The fusion is started with a fission bomb containing Uranium – 235 or plutonium -239. 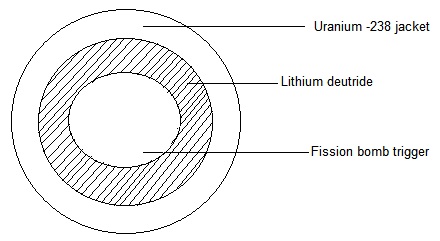