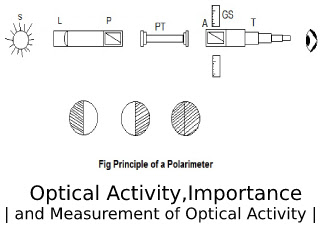 Some liquids and solutions, when placed in the path pf plane-polarized light, rotate it through a certain angle.”The property of rotating plane-polarized light to the left or right is called optical activity and the substance is called the optical activity“.Those rotating in a clockwise direction are called dextrorotatory and those in anti-clock direction are called laevorotatory.

Optical activity is measured in terms of specific rotation. | α | tλ, at a particular temperature t with the help of the light of wavelength λ,

Where,
g = no. of grams of solute in 100 ml solution
d = density of liquid
l  = length of the column of liquid through which light passes.
The angle of rotation, α is measured with the help of polarimeter as shown in the figure.