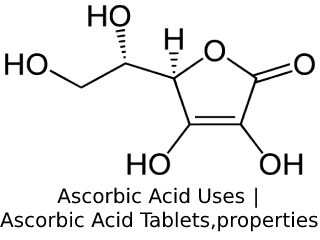 Vitamin C is the common name of ascorbic acid. Vitamin is from the group of water-soluble vitamins. physical properties. Ascorbic acid is a yellowish color crystalline powder. Left in the air, even at room temperature oxidized rapidly.
Because of the carbon has an enantiomer form. And because of this can talk about the projection in the space.

Because hydroxyl groups saw references to polar solvents. The solvents may be water or ethanol.
Ascorbic acid is a weak acidic Properties, also possesses cyclic ring a furan type, the structure is similar to that of glucose. Ascorbic acid has two forms one being reduced, which means that the second and third
carbon atom present two hydroxyl groups, and the other is oxidized these two hydroxyl groups have become carbonyl or ketone. During the process of dissociation ascorbic acids acquires ionization activity, i.e. charge, this form is called ascorbate.
Ascorbic acid can be reacted with organic acids such as Palmitic Acid as products of the reaction, ethyl alcohol, and water.
In the industry of glucose with a hydrogen additive in imported catalyst nickel in order satiety response is obtained polyol called sorbitol. This alcohol by the reaction of dehydrogenation in an environment of the microorganism of the genus Acetobacter formed sorbose (which is a ketone character type monosaccharide). It is passed through an oxidation reaction with the catalyst platinum and then is formed into 2–ketogluconic acid during cyclization obtained interaction occurs by intramolecular nature between the carboxyl group of the first carbon and hydroxyl group on the fourth carbon leads to the reaction of dehydration and cyclization furanyl.
In analytical practice is used to determine the type quantitative analysis by titration process typical example is the process of iodometry, then iodine is reacted with ascorbic acid to give a bluish-black complex.
The pharmaceutical market offers medicines with ascorbic acid in the form of coated tablets of 100mg,500mg; effervescent tablets of 500mg, 1000mg. Also available on the market and ampoules for drinking with ascorbic acid for young children 100mg / 2ml for adults and 100 mg / 5 ml.
The normal dose for receiving tablets and ampoules for adults from 300 to 500 mg once a day for 2 weeks duration of therapy for the purpose of immune protection. For children from 100 to 200mg once daily for 2 weeks treatment
Author. Nidelina Petkova
Location. Bulgaria