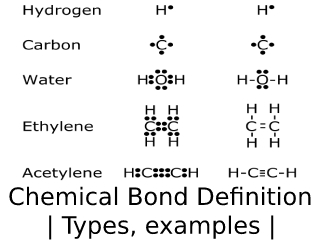 “Chemical Bond Definition” The bond between particles of chemical elements – atoms or ions, in simple substances and in compounds is called a chemical bond. Chemical bonds are covalent and ionic relative to the redistribution of electron density. Only the available free electrons in the outer electron layer are involved in the creation of chemical bonds, which determine the valence, and hence the complexity of the bonds, that is simple and complex.
Free atomic orbitals, as well as those that are not completely filled, are involved in the formation of the chemical bond. In fact, valence electrons are free electrons. The coupled electrons that are to the outer electron layer of the chemical element can also be polarized by ultraviolet radiation. When the atomic orbitals are overlapped, molecular orbitals are formed that have significantly less energy. When forming chemical bonds, the twin electrons must be of different spinality, which means that one will move clockwise and the other clockwise or (1/2 and -1/2ms). At energies that are significantly higher than required to form bonds, the electrons are distributed in parallel with one-way motions in the electron layer.
In conclusion, the reason for the bonding of atoms and the formation of chemical bonds between them is the lowering of the energy of the molecule compared to the sum of the energies of the isolated atoms.

“Chemical Bond Types” According to the concepts of chemical bonding, there are two types – covalent and ionic. The covalent chemical bond is a chemical bond that is formed through electron pairs common to the two bonding atoms is called covalent. It can be simple (single) or complex (double or triple). The directionality of the electron can give covalence to the type of polarity and non-polarity.

The most accurate definition of the covalent chemical bond was made by Lewis as early as 1916. According to his theory, atoms of chemical elements of non- metallic chemical character with close or equal electronegativity are bonded to their covalent electrons, in which the electrons are in opposite quantum in the quantum cell, thus forming one or more electron pairs. This regulates the sustainability of the noble gas.

“Chemical Bond Examples” The covalent bond formed between atoms with the same electronegativity for example (hydrogen (H2), chlorine (Cl2), fluorine (F2), their molecules) is non-polar because the bonded atoms attract electron pairs equally. The covalent bond formed between the atoms with close electronegativity is polar (hydrochloride (HCl), hydrogen fluoride (HF), acetic acid (CH3COOH ), ethyl alcohol (C2H5OH), water (H2O) and so on). Common electron pairs are more strongly attracted to the electronegative non-metallic atom, which, as a result of electron acceptance, receives a partial negative charge and the other atom that detaches from the composition of its outer layer an electron-positive charge.
Species of covalent chemical bonds can be reviewed by:
Metal atoms are linked by a special kind of bond called a metal bond. The metallic bond is regarded as a kind of covalent bond, with maximum delocalization of valence electrons. The electrons in the metal crystal lattice are in constant motion. The building particles in the metal lattice are atoms and ions that make continuous motions. The metal bond is formed by overlapping the valence atomic orbitals, thus forming the same number of molecular orbitals. Molecular bonding electrons move delocalized (without a specific location in the metal lattice). The other electrons that do not participate in the formation of the bond move freely along the entire crystal lattice, they form the so-called electron gas.

maybe formed between water molecules, alcohols, carboxylic acids, and etc. These types of hydrogen bonds affect the properties of the compounds: aggregate state, boiling the point, freezing temperature, solubility, density, and others.

The theory of ionic chemical bonding was first introduced in April 1916 by Kossel. The ionic chemical bond is bonded between atoms of chemical elements that are of different chemical character. Which means that the difference between the electronegativity between the chemical elements is large. The greater this difference in electronegativity, the more pronounced is the choanal nature of the relationship. Like an atom that is more electronegative (to the non-metal), it traps the electron of a chemical element of metallic nature. as a result of the pull, the electron is attributed to the non-metallic element and orbits around its outer orbit, and the metallic element acquires a positive charge.
Author: Nidelina Petkova
From. Bulgaria