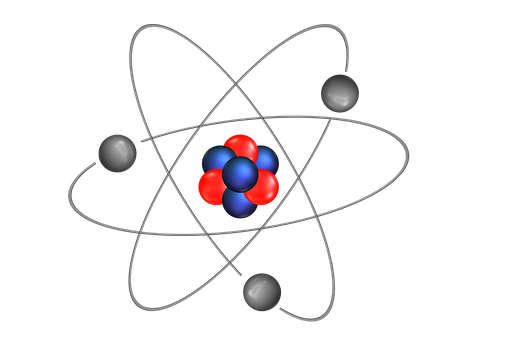 Protons. are positively charged particles. Their size is equal to 1,6 • 10-19 coulombs and mass 938 MeV / c2 (1,6726231 • 10-27 kg, or about 1836 times larger mass than that of electrons. Protons were discovered in 1918 by Ernest Rutherford. He notices that when fired to alpha particles in nitrogen gas scintillation detectors report that the consequence of this exposure is separated hydrogen.

Neutron. has zero charges. Observed spin as the proton + -1/2. Outside the core neutron is unstable. Neutron is classified as baryon and comprises two lower and one upper quark. The mass of the neutron is characteristics 1.674 927 × 10-27  kg.
Electrons. have a negative charge. The charge of the electron is indivisible and equal to 1,602 189 2 (46) × 10-19 C or -1 elementary electric charge. Mass of the electron is equal to 9.109 558 × 10-28 g. The movement of electrons produces electrical phenomena such as electricity.
Atoms can exist in the free state or be interconnected in molecules by chemical bonds, also based on electromagnetic forces. The atom with an equal number of protons and electrons is electrically neutral, otherwise, it has a positive or negative electrical charge and is called ion. The various atoms are classified according to the number of protons and neutrons in the nucleus: the number of protons determines the chemical element, and the number of neutrons determines the various isotopes of the respective element.

In the nucleus there as protons and electrons. One atom number of protons corresponds to the serial number of the chemistry unit. When there is a change of the atomic number of each chemical element, is then monitored and its isotopic forms. Isotopes have the same serial number, which means they have the same number of electrons in the nucleus or represent the same chemical element. Have a difference, however, in the number of neutrons. An example is a hydrogen and its isotopic forms three: protium, deuterium, tritium.

The electron shell of the chemical elements is full of electrons. Based on the single unpaired, valent external electrons or partly paired, which subsequently a process of agitation that is, a mechanism of ultraviolet radiation in which it is possible to reach the parallelism or influence and increase the energy levels can be reacted with another chemical element, or with same and to achieve formation of the compound. This property, in which the chemical elements increase the activity and form compounds called chemical reactivity.
Electrons constituting the chemical elements are arranged exactly in specified layers. The layers are located at different distances from the nucleus. Each of the available layers has a different energy. The energy of the first layer which is situated only two electrons are lowest. For the first time a model of Niels Bohr, who described the arrangement of electrons orbiting.
Each layer, which is available electrons surpasses the previous layer available more energy because of the contents of electrons within himself. The last layer in which electrons are called external electronic layer or valence. The electrons, which are located in the outer electron layer are recorded formulas. As an example, the formula of Lewis.

In Lewis formulas present single unpaired, valence electrons and electron pair paired which are parallel and of low energy. Paired electrons participating in the formation of connections. Only if there is a free atomic orbital and a process of exposure to ultraviolet energy can increase the valence electrons to split common electronic connection.
Author. Nidelina Petkova
Location. Bulgaria