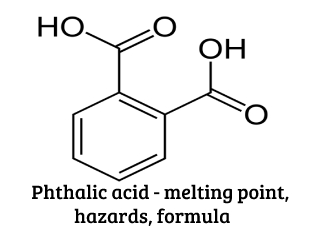 The acid is soluble in water, sparingly soluble in ether. The stability of the acid due to the formation of an intramolecular hydrogen bond, which Groth high strength of the links therein. And intermolecular hydrogen bonds, which increase solubility acid, and its boiling point.
Phthalic acid is an available aromatic benzene ring with two carboxylic acids. These carboxyl groups are directly bonded to the benzene core. Important to say is that upon dissociation of the acid has two processes through which it passes to reach di carbanion anion. Which determines its two degrees of dissociation Kg1 and Kg2. Analytical measured values, dissociation constants measured at the set of default conditions (room temperature- 25°C) pKa1 = 2.76 and pKa2 = 4.92.
Dicarboxylic acid 1,4-benzene dicarboxylic acid (terephthalic) has the ability to polymerize. in the manufacture of structural hetero condensation is produced for the synthesis of nylon- 66.

Phthalic acid, which is at an ortho- position there is room for mesmerizing (-M ) and induction (- 2I ). No duplication of position substitution reactions. The chemical properties of the phthalic acid were determined by the aryl moiety and two carboxyl groups.
The carboxylic acid containing a carboxyl group can participate in the process of interaction with strong metals of the first and second “A” group (alkali and alkaline earth) reaction with ammonia by the method of donor no- acceptor theory of Lewis; interactions with alcohols, resulting in an ester formation and removal of water; reaction with phosphorus trichloride, phosphorus pentachloride; decomposition to give the anhydride, and water separation, as a condition is heating. There are effects on combustion in an oxygen environment to form carbon dioxide, water and also removal of a large amount of energy. Also when heated can be monitored decarboxylation.

In primate Phthalic orally observed change in the levels of sex hormones. Studies have shown that when administered to men Phthalic influences the process of formation of spermatozoa said process spermatogenesis. This can happen as a direct influence on the synthesis of male hormones called androgens. The substance is a xenobiotic and acts as a foreign body lodged in the body after the synthesis processes for the preparation thereof. The effect of the substance decreases by its separation into urinating.
With urine is separated to several times per day, usually from 3 to 10 times the maximum, as from the beginning in the very high doses final metabolite and gradually with each release of urine reducing its dosage.
When working with substance use gloves.

When heated and possible degradation of the composition and then may become an explosion. The product which is obtained contains oxides of carbon. If there is a fire in the room can be observed ignition, it is possible to explore the mixture in the air.

When vapors of phthalic acid may be priyavrat sharp symptoms by inhalation cough skin- redness, pain. Must be used gloves when working with phthalic acid. If it gets phthalic acid on the skin can be achieved following primary care: pouring water into lasting 20-30 minutes. The use of creams, coleus.