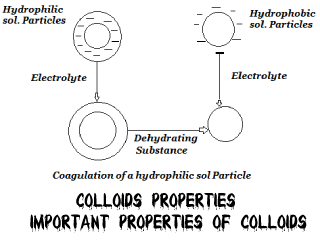 Some important properties of colloidal solutions are listed below.

A colloidal solution is heterogeneous though solute particles are invisible under an ordinary microscope. They can be detected with the help of an ultramicroscope.

The osmotic pressure of a colloidal solution is very small because of the number of colloidal particles are small as compared to a solution containing the same amount of solute particles in a given volume of solvent. 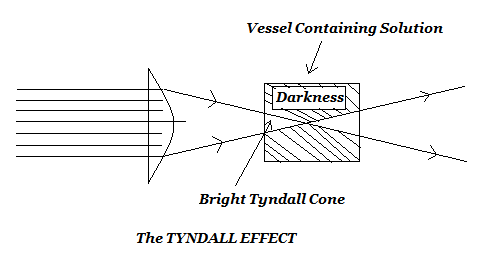 The colloidal solution is usually coloured due to the scattering effect of particles. The colour depends upon the size and the nature of particles, e.g.

“The suspended particles in a colloidal solution are in a constant rapid zig-zag motion. It is called Brownian movement”.

It is because of unequal bombordment by the solvent molecules or the molecules of the dispersion medium, which has comparatively smaller sizes.

If the colloidal particles in sol are maintained in a stationary state, the dispersion medium
moves. “The movement of dispersion medium under the influence of the electric field is
known as electro-osmosis”. This phenomenon has been used dewatering peat, moist clay,
drying dyes and pastes.

The precipitation or coagulation of a colloidal solution can be brought about by the addition of a small amount of an electrolyte, e.g., a few drops of barium chloride to arsenious sulphide precipitate it. This is because of the reason that ions of electrolyte are absorbed by the colloidal particles. These form bigger aggregates and settle down as precipitate. In our example, sol particle being negatively charged, are neutralized by Ba+2 ions and form a precipitate. 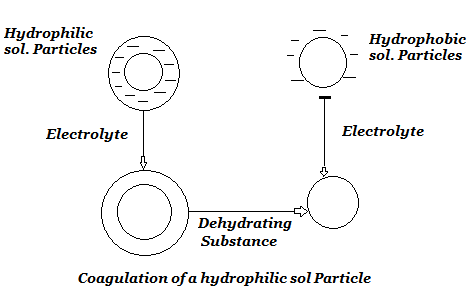 It is concerned with the power of an ion to coagulate a sol, It can be stated as. “The higher the valency of the active ion, the greater is its precipitating action”, e. g. the precipitating action of cations Na+, Mg2, and Al3+ is of the Order.
Na+ < Mg2+ < Al3+

“The process by which the sole particles are protected from precipitation by electrolytes due to the previous addition of some hydrophilic colloid is called protection” The colloid added for protection is called a protective colloid. e.g., if a little gelatin is added to gold sol, it is not coagulated by the addition of sodium chloride. In this case, gelatin is a protective colloid. 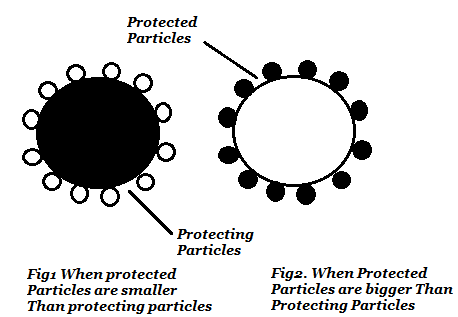 The protective colloid particles form a protective layer about sol particles and thus prevent their precipitation.