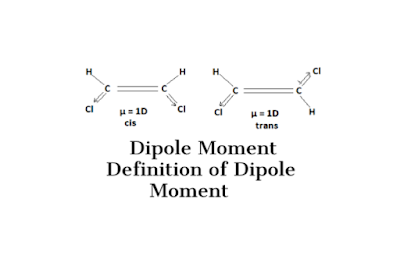 The dipole moment of a molecule measures the concentration of positive and negative charges in different parts of the molecule and is equal to, the product of the size of charge and the distance between the centers of the positive and the negative charges. It can be measured if a gas whose molecules have dipole moment is placed between the plates of a condenser and a potential difference is applied to the plates; the molecules tend to orient themselves with the electric field and change the capacity of the condenser. The ratio of the capacity of a condenser in the presence of a substance to the capacity in a vacuum is the dielectric constant, of the substance. Since the alignment of the molecules is opposed by thermal agitation, it is possible to calculate the dipole moment of the molecule from the variation of dielectric constant with the temperature. The dipole moment is designated by the symbol μ. An electron has a charge of 4.80 x 10-10 electrostatic units (esu) and the charge at either end of the bond is less than this but of the order of 10-10 esu. The distance between the centers of the charges are of the order of 10-8 cm, therefore, the usual magnitude of the dipole moment is of the order of 10-18– esu x cm. This quantity is known as a debye unit or simply a debye. It is given the symbol D. Thus chlorine fluoride which has a dipole moment = 0.88 x 10-18 esu xcm is said to have a dipole moment of 0.88 D.
Many organic molecules that have polar bonds do not possess molecular dipoles because the individual bond moments are so oriented that they cancel out one another. For example μ = 0D for carbon dioxide because the molecule is linear and the two bond moments which are equal and in opposite direction cancel out each other.