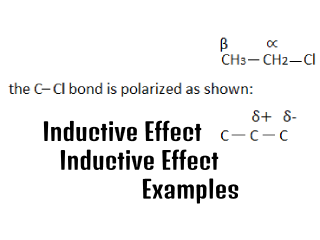 It has been pointed out that when there is a covalent bond between two unlike atoms, the bonding electron pair is nearer to the more electronegative atom. The bond is said to be polarized. Thus, for example, in

Since the ∝-carbon atom bears a partial positive charge, it will attract the electron cloud between it and the β-carbon more to itself, i.e., the electron cloud between C∝ and Cβ will lie closer to the ∝-carbon and thus create a partial positive charge on the β-carbon. The β-carbon, in turn, will have greater attraction for the bonding electron pair between it and a β-hydrogen atom. Therefore, the electron cloud between the β-carbon and a β-hydrogen will lie closer to the β-carbon creating a partial positive charge on the β-hydrogen. Thus a polar bond between two unlike atoms induces charge separation in an adjacent bond and even farther along a chain. This permanent dipole induced in one bond by another is called the inductive effect. The effect diminishes as the distance from the polar bond increases.
In the above example, the C – Cl bond is the polar bond which induces permanent dipoles in the neighbouring C – C and C – H bonds.
The inductive effect changes the electron density at the atoms involved and, therefore, their reactivity is affected. Chloroacetic acid is about 100 times as strong an acid as acetic acid. The polarized C – Cl bond in chloroacetic acid induces charge separation in the adjacent C – C bond which, in turn, polarizes the C – OH bond so that the electron density at the hydroxylic oxygen atom is relatively reduced. Thus the O – H bond in chloroacetic acid is easier to ionize as compared to the O-H bond in acetic acid. Also, due to the inductive effect, the negative charge on the oxygen atoms of the chloroacetate ion, CICH2,COO− is less dense relative to the negative charge on the acetate ion, CH3COO−. This makes the chloroacetate ion more stable than the acetate ion. The two factors combined together make it easier for chloroacetic acid to lose the proton as compared to acetic acid. Thus chloroacetic acid is stronger acid than acetic acid as shown by pKa of each.

The only difference between the two acids is that a hydrogen atom of acetic acid has been replaced with a chlorine atom in chloroacetic acid. A chlorine atom is, therefore, inductively electron-withdrawing or electron-attracting as compared to a hydrogen atom.
The effectiveness of the chlorine atom in increasing the acidity becomes less important when it is introduced at a site farther removed from the acidic hydrogen.
Thus 3-chloropropanoic acid, CICH2CH2COOH is a weaker acid than chloroacetic acid. It is, however, a stronger acid than acetic acid itself.
To see the inductive effect of alkyl group consider the relative acidities of acetic acid and formic acid.

We notice that the replacement of a hydrogen by a methyl group, makes acetic acid about 10 times weaker than formic acid. Thus acetic acid loses the proton less readily than formic acid which indicates that the methyl group is electron releasing as compared to the hydrogen atom, and is said to have +I inductive effect.
On the other hand a group like chlorine which is inductively electon-withdrawing relative to hydrogen is said to have -l effect. In fact all common groups with the exception of alkyl groups fall in this category. This means that all groups having -I effect when substituted for a hydrogen atom of acetic acid will cause an increase in acidity. The relative size of the inductive effects of various Y groups may be determined from the acidities of the acetic acid derivatives of the type YCH2COOH, An approximate order of the decreasing strengths of the inductive effects of some common electron-withdrawing group is:

An approximate order of the decreasing strength of the inductive effect of electron-releasing alkyl group is R3C > R2CH > RCH2 > CH3.