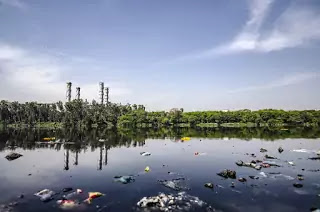 Soil may be broadly defined as the weathered layer of the earth’s crust with living organisms and their products of decay. The word Soil is derived from a Latin word Solum. it means earthy material in which the growth of plants takes place. Soil is a complex physio-biological system. it contains water, mineral salts, nutrients, and dissolved oxygen. It provides anchorage to plants. The study of soil science is called pedology.

Types of Rocks in Earth’s Crust.

The earth’s crust basically consists of the following three types of rock.

Sedimentary rocks are developed as a result of gradual accumulation, consolidation, and hardening of products of weathering of mineral materials. These things are brought about by wind or waters. These rocks are characterized by the presence of distinct sedimentary layers.

These rocks are formed as a result of the metamorphosis of igneous and sedimentary rocks under the influence of high pressure and intense heat.

The modification of the earth’s crust as a result of Its interaction with atmosphere and hydrosphere is called weathering. Due to constant battering of the earth’s crust by wind, rains, and changes in temperature, the constituent rocks are deposited into small fragments. The final products of weathering are sand, silt, gravel, and clays.

Like air and water pollution, soil pollution is of considerable importance.
Soil pollution was originally defined as the contamination of the soil system by considerable quantities of chemicals or other substances. This results in the reduction of its fertility or productivity with respect to the qualitative and quantitative yield of the crops.
Pollutants remain in direct contact with the soil for relatively long periods in soil pollution. These pollutants change the chemical and biological properties of the soil. The harmful chemicals enter the human food chain from soil or water plants.
The main aspects of soil pollution are smelting, sludge, fertilizers, pesticides, etc.

The various approaches to control soil pollution are as follows: