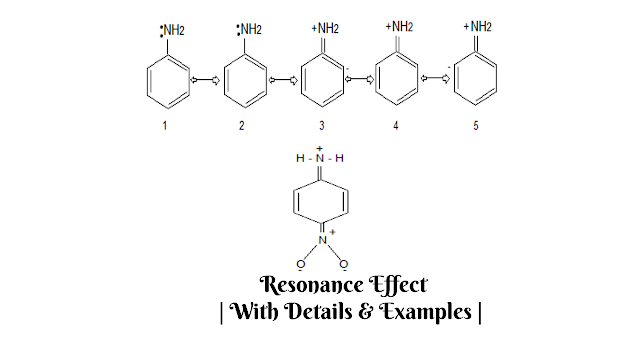 However, the real structure of vinyl chloride is not

but a hybrid of structures such as

Thus the electron density due to the unshared electron pair is not confined to the chlorine atom but is spread out over the whole molecule. This decrease in electron density at one position accompanied by a corresponding increase at another position is called the resonance effect. We sometimes say that the chlorine atom in vinyl chloride is electron-donating by the resonance effect. There is, however, no actual donation of electrons. What the statement means is that the electrons are distributed in a manner that is different from the expected distribution for a system with no resonance. Since the resonance effect changes electron densities as compared to molecules with No resonance, the observed deviations in bond lengths, dipole moments, spectral behavior, and chemical reactivities of resonance hybrids relative to molecules with no resonance are ascribed to this effect. For example, aniline is known to be a weaker base than ammonia.

In terms of resonance, the difference in basicity is due to the fact that in NH3, the unshared electron pair shown on nitrogen is restricted entirely to the nitrogen atom. if the real structure of aniline were

then the electron density due to the unshared electron pair would reside entirely on nitrogen only and aniline would be expected to have basicity (ability to donate an electron pair) comparable to’ that of ammonia. But the real structure of aniline is a hybrid of the following structures:

The contribution of the structures 3, 4; 5 implies that the unshared electron pair of the nitrogen atom is delocalized over the ring; the electron density on nitrogen is decreased while that on the ring is correspondingly increased due to the resonance effect. The nitrogen atom is said to be electron donating by resonance. The decreased electron density on the nitrogen atom of aniline relative to ammonia (where there is no resonance) explains why aniline is a weaker base than ammonia. The contribution of structures 3, 4, 5 also explains why aniline is more reactive than benzene in aromatic electrophilic substitution reactions such as nitration, bromination, sulphonation, and the Friedel-Craft alkylation and acylation, the ring having been made richer in electron density relative to benzene by delocalization of the nitrogen electrons over it.

The chlorine atom is electron-withdrawing due to the inductive effect; i.e., the carbon chlorine bond will be polarized as follows:

However, the observed dipole moment of vinyl chloride is smaller than that of ethyl chloride. The contribution of the structure 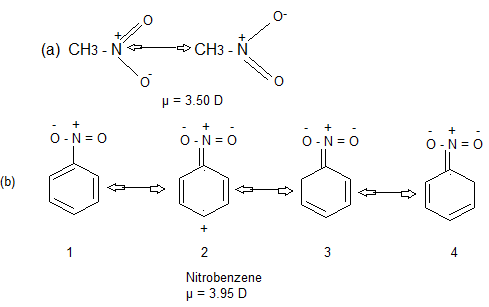 Similarly, the dipole moments of aniline, phenol, chlorobenzene, and methoxy benzene are smaller than those of their aliphatic analogs due to the significant contributions of the following structure. 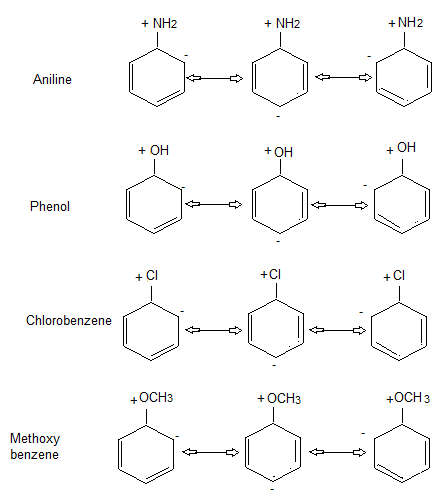 It is of interest to compare the dipole moments of the following compounds:

The very low basicity of p-nitroaniline (much lower than that of aniline) is also explained on the same ground, the electrons of the amino nitrogen being delocalized over the entire molecule including the oxygen atoms of the nitro group.
The C – Cl bond length in vinyl chloride is shorter than that in CH3– CH2, CI (ethyl chloride) because the contribution of the structure

In summary, the concept of resonance is useful in making at least qualitative predictions about the structure and reactivity of compounds. It has also helped in understanding the behavior of compounds which was considered to be anomalous in terms of single structures assigned to them prior to this concept. The molecular orbital approach and the resonance method are two different ways to explain the delocalization of electron density and in most cases, these two theories lead to similar conclusions. It may be emphasized once again that a resonance hybrid is only one substance, with one structure which is a weighted average of. the resonance contributing structures.