The Milky Way galaxy also known as “The Galaxy”, comprises the Sun and Nine planets in addition to about 100 billion stars with a diameter as big as 100,000 light-years. It is a spiral type of galaxy. The structure of the Milky Way is quite complex. It has at least six discernable components — a nucleus, a central bulge, a flattened disc, two spiral arms, a spherical component, and a massive halo. 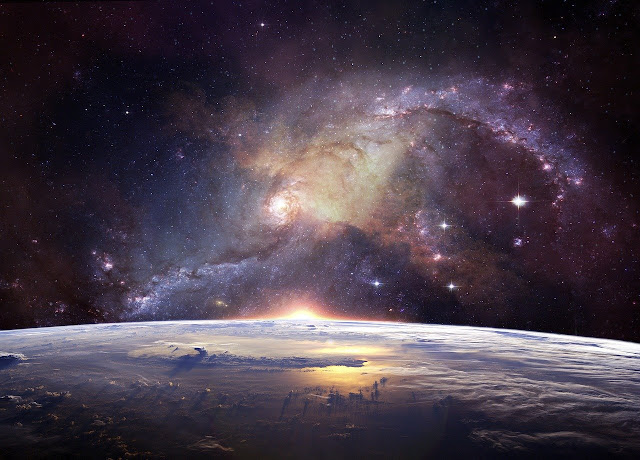 The 100-billion stars that the Galaxy is made of are concentrated in the nuclear bulge that is a flattened sphere some 15,000 light-years in radius. Surrounding this bulge is a disk about 40- of 50,000 light-years in radius. This disk, in addition to the stars and most of the dust and clouds of the Galaxy, also houses the Solar System. The Sun is not the center of the galaxy as it is about 27,000 light-years from the center.
Outside the disk is a nearly spherical distribution of the widely separated stars and massive global clusters extending to nearly 75,000 light-years also known as the “halo”. according to some the halo is surrounded by a tenuous but more extensive “corona” of invisible matter which may extend to as big as 2,00,000 to 3,00,000 light-years and account for more than 90 percent of the total mass of the Galaxy.

The Milky Way galaxy is rotating along with the Sun at a speed of 230 km per second in a near-circular orbit around the galactic center. It takes about 220 million years to complete one orbit! Stars close to the galactic center have shorter orbital periods than those placed far away but they do not behave like the planets do traveling around the Sun. (The planets when placed farther from the Sun have lower orbital speeds). Весаuse the mass of the galaxy is spread over the vast distances and the speed of a star is governed not only by its distance but also by the mass that lies inside it as also by the mass that lies outside. So greater the distance of the star, greater is the mass acting upon it. Star speeds close to the galactic center are high and decrease as they move to the outer fringes but as they farther out speeds increase to about 230 km per second at Sun s distance and to some 300 km/sec at a distance of 60,000 light-years from the center. This, therefore, also implies that a large fraction of the mass in the Galaxy lies at the fringes for if this were not so the speed of the stars beyond the Sun would begin to decrease.

The Galactic center is marked by a powerful radio source known Sagittarius A. And as much of these emissions are from a source as small as our Solar System the center of the Galaxy must contain a black hole of several million solar masses, The Milky Way Galaxy is also known by its Indian name as ‘Akash Ganga’.

Why the Stars do not collapse?